The alarm went off at 7:30 in the morning, Cole and I were slow to get out of the tent. Eventually we got going, we departed Foggy Dew Campground around 9:45am. Pulling out of the campground we went left on a dirt road which eventually took us the wrong way traveling in the opposite direction of where we needed to go, oh well. We lost a half an hour of time on our detour, but did eventually reach the right trailhead up Libby Creek. Wally had planned on meeting us, but we didn’t see his car anywhere, we proceeded without him hitting the trail under blue skies about 11am.

We picked up the faint path through a sparse forest of ponderosa pine and a few quaking yellow aspen. The trail started out on a comfortable grade but quickly gave way to a series of switchbacks. We weren’t hauling the light day-packs we had yesterday on the on the PCT, these were fully loaded four season bags equipped to spend a night in some of the harshest climate imaginable. Feeling the load we adapted quickly and dropped the pace a notch, when hiking during the cold weather season if you sweat too much, you get cold, and if you get cold you risk hypothermia. We stopped often as we climbed the open slope above the trailhead, doing our best to stay hydrated. It didn’t take long for views to open up back down the valley all the way down to the Methow River. The trail traversed west below a ridge through sparse forest, tall grass, and even a few sagebrush. Eventually we gained a small ridge and entered the trees walking a spine as the slope dropped off on either side. We made our way through the forest enjoying our time on the trail, and excited for the blue skies above us, spirits ran high! We crossed a dry creek and continued up, the trail now heading south. The grade for the most part was up, usually steeply over a rutted and rocky path, it was a grind. We pressed on, and eventually golden larch begin to make an appearance. Soon granite rock formations began to peak our interest, it was nice to have something to look up too to keep us inspired. We reached a crossing of the North Fork Libby Creek at a good camp, made the boulder hop and continued on, still climbing. The tree canopy began to open up offering our first views toward the granite cliffs above adorned with golden larch, the fall color is why we are here. It’s hard not to sound like a nerd when you tell people that your favorite trip of the year is during the harsh winter like conditions to hunt for golden trees that only put on a show one measly week a year, but oh is it splendid! Only a handful would understand.

Eventually we found a good lunch rock in the sun offering a spectacular view toward the shoulder of Ragged Ridge to our east. We basked in the sun for a while, letting the sweat dry from our backs while we ate and enjoyed our fair weather. With lunch out of the way we loaded the oppressive packs, and continued up, sometimes buried in dense forest, other times in open park like meadows with golden larch all around, eventually valley views began to open up as the terrain fell away below us. About five miles back we came across an old dilapidated cabin that was abandoned generations ago, but still refused to fall, even with weight of a larch tree growing right out the top of it. We lingered for a minute exploring the historic landmark and all its character, man, if those walls could talk. Eventually we had to move on and picked up the trail to the left of the cabin. Continuing with the climb, the grade went from mild to wild as we tried not to knee ourselves in the chin grinding straight up the mountain, it was damn steep! We crossed a few exposed spots in the trail that i wouldn’t want to traverse with any snow on the ground, one little slip and that could be it. The views began to really open up as we traversed a canyon offering views toward Ragged Ridge and all its gnarly granite. The trees began to dissipate as the meadows opened up and the air began to thin, we were so close. Alas! We had made it, after climbing what felt like forever we were finally here, Libby Lake and all her splendor.

What an impressive alpine setting, a stark landscape of jumbled and broken granite, golden alpine larch, and pristine waters, all backed by an unforgiving impenetrable wall of sheer granite stained black from a million years of exposure to some of the most harshest conditions mother nature had to offer, and we had this place all to ourselves! Thank god we were the only ones looking to pitch a tent, we searched for an hour trying to find a site big enough for two tents and never found it. We ended up finding room for two tents fifty yards a part. We set up camp taking advantage of the fading light then made our way down to the outlet creek then boulder hopped to a granite precipice in order to catch the final light play on the golden larch needles along the lake shore. Perched among the granite boulders we were treated to an awesome view back down the valley as far as the eye could see, it was breathtaking to say the least. We hung out for some time before finally calling it quits, with the sun now behind the ridge the temperatures instantly dropped. Back in camp I donned the fleece pants, mountaineering socks, gloves, balaclava, and down jacket. Next we built a good fire ring before collecting a bunch of firewood from a old downed larch that Cole discovered about 100 yards from his camp. It was a long haul but soon had enough dead tamarack to start a forest fire if we needed to. After a 6 mile climb over 3,300 feet of elevation gain and all the camp chores it was finally time for a break, so to the lake we went. We set up our chairs over a nice view of the lake surrounded by granite boulders to block the frigid wind. We could finally relax over a happy hour cocktail while taking in the view, what a reward! We shared a few laughs for a good while before the weather turned and a squall blew down from the ridge tops leaving the lake basin under a dusting of snow. We decided to retreat to a warmer place and made our way to the campfire. It didn’t take long get a good flame going as the dry larch branches burn hot and fast, with a solid fire going we had dinner and eventually a couple more cocktails while watching the stars dance across a moonless sky. Libby Lake gave us one of the best star shows I had ever seen, we could make out the Milky Way, Big Dipper, Little Dipper, Northern Cross, and Cassiopeia just to name a few. Eventually, I could no longer keep my eyes open and turned in for the night.

The next morning we fixed another fire, ate breakfast, and broke camp. There was some talk of a scramble to the ridge to our north but with the high country buried in clouds we opted against it, why put in the work if you can’t enjoy the view, might as well enjoy what we have right in front of us. We opted to explore the lake basin and traveled a short ways along the northern shore of the lake to catch a view back toward the outlet and the splendid scene of golden larch, it was the perfect way to top off such an awesome trip. Back at the packs we shouldered the load, which actually felt a lot better with some liquid and food weight removed. We made the long haul out, passing several day hikers on the way to the car, but no one crazy enough to haul in full packs to spend the night. Back at the car we took a much needed break and enjoyed a victory beer as we recapped another successful larch trip, one that had been missed the last three years due to injury and fowl weather, Libby Lake was well worth the wait. This trip had been on the back burner for years do to the daunting stats, it was nice checking it off, Im not getting any younger and the hiking isn’t getting any easier, glad i was able to get it done. If you’re looking for a workout with some solitude in the cascades Libby Lake is the answer, we covered about 12 miles round trip with around 3,300 feet of elevation gain. For more pictures click the link. Libby Lake Hiking Pictures 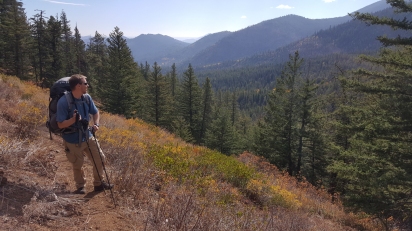 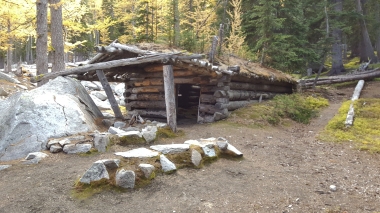 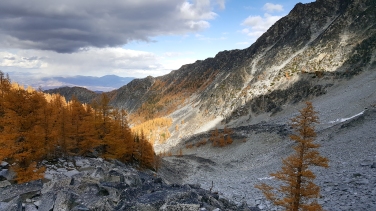 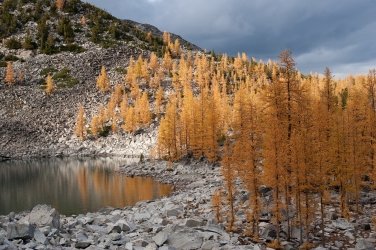