After dropping the kids off at school I picked up Cole. Four hours later we arrived at the trailhead for the Pacific Crest Trail north of Highway 20 at Rainy Pass. After loading provisions for the day we left the trailhead at about 11:45am. It’s been awhile since hiking the PCT, a trail that has some allure due to its popularity and status as a through hike, a trail that can be hiked from Mexico to Canada, how cool. After passing the little triangle shaped PCT marker we made our way up the comfortable trail through dense woods.

We left the trailhead under mostly blue skies but that quickly changed as a thick inversion zone settled into the valley. It didn’t take long for us to cross our first creek at a picturesque waterfall that dropped near the uphill side of the trail and continued on below over the downhill side. We rambled along finding a couple of breaks in the tree line but the views remained elusive, shrouded by the grey wall of clouds. I was beginning to get a bit concerned, I have hiked trails like this in the past, sometimes the clouds won’t lift, and we traveled a long way to miss out on the views. The trail to Cutthroat Pass had been on my to do list for a lot of years, forever shelved by a less than favorable forecast, my plan had always been to do it as a three or four day hike starting at Harts Pass, oh well. We pressed on through the trees, enjoying the easy grade and cool temps, the hiking was relatively easy, mostly due to the fall weather. Before long we reached a signed creek crossing of Porcupine Creek and a short ways beyond found a nice log to take a break on, we jumped at the opportunity. After a drink of water and a small snack we pressed on.

The weather was beginning to change, sunlight was beginning to hit the forest floor as patches of blue sky were beginning to show, I was giddy, like a kid in a candy store. We continued on, the grade perfect, I could hike a trail like this all day. Eventually we could make out a giant hole in the tree canopy, alas, views! We broke out into the open and were afforded our first glimpse of the high country. To the east were views of Cutthroat Peak adorned with golden larch, and to the north was our objective Cutthroat Pass, also buried in the orange glow of fall larch trees. From here on out our pace slowed as the views got better and better as we made our climb and more and more golden larch embraced the tree canopy. We passed a couple of good camps before the trail traversed below Cutthroat Pass switchbacking up the east side of the drainage. The view back down the valley became even more spectacular and with that our pace slowed to a crawl, we couldn’t help ourselves. Believe it or not, eventually we did reach Cutthroat Pass, and were rewarded with one of the most amazing alpine panoramic vistas I had ever seen, truly spectacular! We had to drop the packs, you can’t just walk past a view like this. We grabbed our lunches, it was about 2pm. I enjoyed a couple of spring rolls, an apple, and half a jalapeno bagel while we took in the view.  Far below was shallow Cutthroat Lake, a place I had visited years ago on previous larch hike. The fall color was at its peak, golden larch carpeted the alpine meadows while red blueberry bushes surrounded our bootlaces, there is no way to describe in words how magnificent this place is, go see for yourself! After lunch we packed up and continued down the trail, we pressed on further, how could you not, especially when the guidebook dangles Tower Mountain and Golden Horn in front of you.

We departed Cutthroat Pass as the trail continued above tree line as far as we could see before disappearing around a corner. We soon reached the bend and were treated with another spectacular view. We pressed on approaching what appeared to be another saddle, which we assumed was Granite Pass. As we reached the saddle the trail stayed high as it rounded another corner. We made the turn and were greeted by an amazing scene. The trail continued west affording us our first view toward the Needles and below to the Pine Creek drainage, and last but not least, to our west Tower Mountain and the Golden Horn, two of the most iconic summits in the North Cascades. I have waited for what felt like a lifetime to lay eyes on that view. We continued on, to just above Granite Pass to take in the view toward Mount Hardy and the Swamp Creek drainage falling out of view to the southwest. We took a short break before back tracking a ways to scramble a knoll just behind us up the trial. The view from the top was breathtaking, one of the most amazing scenes I have ever seen. I could have spent a lifetime on that summit but felt lucky enough to be there to watch the sun slip behind the ridge and watch the low evening sun bath a sea of glowing larch with golden light. We took it in as long as we could but eventually found ourselves up against the clock and running out of daylight. We descended the knoll to regain the PCT heading south toward Rainy Pass.

The hike out was slow as the light continued to change as the sun set, the views across the valley to the east toward Cutthroat Lake and to the south toward Rainy Pass were amazing, this has been by far one of the most amazing experiences I can remember in the mountains, and one that will be with me forever. Once back into the trees and the views behind us we made quick work of the last three miles or so back to the car. We finished the hike as the final light slipped away casting darkness across the North Cascades, we lingered for a minute with the boots off at the trailhead and enjoyed a beer before packing up and heading into Winthrop. We stopped for dinner at the Old Schoolhouse Brewery where we were able to grab the last two spots left in the joint right at the bar. We sipped a couple of brews while watching the 10th ranked Huskies lay the beat down on 6th ranked Stanford, GO DAWGS! Cutthroat Pass is world class, but the trail beyond to Granite Pass is a must. We covered about 14 miles round trip with 2,300 feet of elevation gain. For more pictures click the link. Pacific Crest Trail Pictures 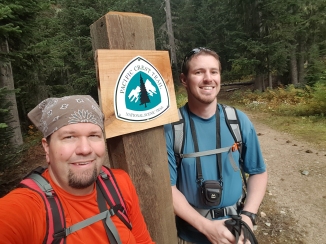 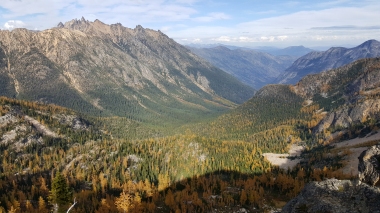