We got an early start out of Spokane, but thankfully not too early.  After dragging my raft off my trailer Cole and I headed to my brothers house to pick up his old aluminum 17 foot Grumman canoe. After loading the boat and a little bullshitin with my brother we picked up I-90 east for Idaho. We did the mandatory boat check in Post Falls. I was a little worried they would give us crap for how dirty the boat was but the child holding the clip boat never complained.

On the backside of 4th of July pass we reached the Rose Lake exit and headed south. We passed through the broad valley that is the home of the Coeur d Alene River.  There is no current here so it is hard at times to distinguish what is a lake and what was the river, but the landscape was definitely easy on the eyes. Jameson got a kick out of big herd of elk in a field, they appeared to belong to somebody. Not too long ago a grizzly bear was shot and killed by a rancher near Rose Lake for harvesting his elk, wonder if it was the same harem. It was the first time a grizz had been seen in the lower Coeur d Alene in over 50 years, too bad the encounter didn’t have a different outcome.

Before long we reached the put in at the first bridge over the river and scouted from both sides, after a peek we both decided the west side of the river downstream of the bridge was doable. Once parked we made quick work unloading the canoe and truck, swapped sandals for boots, then made the steep 50 yard portage to the river bank. I warned Jameson often, explaining that the sediment in the river was contaminated with heavy metals from the mines upstream, but it must have went in one ear and out the other cause every time I turned around we was wallowing in the muck. It didn’t take long for Cole and I to rig the canoe, then came the hard part, trying to launch a fully loaded boat in the water, it was harder than we thought. Well, after a brief struggle we were off. Jameson had the best seat in the house, perched atop the cooler with a gear pile as a back rest, I was jealous.

The placid waters of the CDA river were re-refreshing, at first, it wasn’t too long before a couple of motor boats zipped by leaving our canoe tipping in their wake. Don’t get me wrong, most boaters were polite when passing, but like my dad always said, “there’s an asshole everywhere you go.” We knew we would encounter motor boats on this trip and they didn’t by any means take away from the adventure, but every once and a while you were reminded of their presence.  We continued downstream, the scenery was great, and the feel of the area was one of nostalgia. Powered by your own means, the way our long lost ancestors did felt like one of grace, it was neat. The weather was perfect, storm clouds had developed on the horizon and a slight upstream breeze was always there to cool us off. If Cole and I weren’t paddling, we weren’t moving, so temps in the low eighty was a sigh of relief from the constant 90 we had been used too.

We paddled downstream for just over two miles before deciding it was lunch time, we found a doable grassy landing on a left hand bend in the river on the right bank. Once parked we carefully stepped ashore and retrieved our cold cuts from the cooler. The riverfront view from our lunch spot was inspiring, being surrounded by slightly threatening thunder clouds only added to the dramatics of the landscape. It’s a shame such a place of beauty has gone to waste by years of abuse upstream, polluted waters and sediment make recreation a hazard, you would never guess we were afloat a cesspool.  Generations before with nothing but greed in mind got rich quick at the cost of this wild place. One can only imagine what it was like before the white man and development, what a waste. Nonetheless, there is lots to enjoy here, and mother earth is slowly licking her wounds. If the Spokane River had never been damned we probably wouldn’t be able to access the many chain lakes because the now slack water river trails would have been tributaries with current impeding upstream navigation by boat.

After our relaxing lunch it was back to work and a short ways downstream we discovered the channel with sign pointing the way for Killarney Lake. The channel was a nice change of scenery and was much more peaceful do to the lack of powerboats and it being half as wide as the river. About a mile up the channel we discovered the lake. It was cool to watch the landscape open up, we had been confined by a river bank the whole way up and now we were being treated to a sweeping mountain view beyond a mass of water, the Vista was spectacular.  We paused in the open waters a minute drifting at will just taking in the views, it was a pleasant reprieve. We could make out tiny Popcorn Island off in the distance and with calm water we decided to abandon the shore line for the open water, and a more direct route. Jameson was excited, as was I, a real adventure. Our only hope now was that no one was planning on camping at the lone campsite on the island tonight. It was a pleasant Saturday in August, prime boating and camping season, but we did hear that the dock was destroyed by a winter storm,  so that was our only hopeful deterrent to keep the hoards away.

We made quick work with the paddles and before long discovered the dilapidated dock, and to our surprise we had the place to ourselves, our own personal island for the night! We made quick work of unpacking the canoe then flipped the boat over on some rocks in case a storm blew through. With gear in hand we made the short but steep jaunt to the summit of the island. We decided to take a break before getting to work and set up some chairs in the sun on the south side of the Island and took in the expansive view of Killarney Lake. Jameson stumbled across a make ship fishing pole. After our short break we returned to camp to pitch tents, make beds and shortly after that chore we grabbed a few beers and made our way down to the lake. Near the canoe were some nice natural rock steps that made for a good place to wade and swim, Jameson didn’t waste any time getting into the water, then followed myself and eventually Cole. Going backpacker style we swam in our underwear, what better way to do the laundry if ya ask me. We swam, waded and drank beer in the sun, it was awesome.

Jameson loves the water, and as he became more confident we were able to coach him into swimming out to a boat where more young kids about the same age were playing, obviously he was wearing his life jacket. They were nice people who willingly took Jameson aboard. He played with the other kiddos on and off the boat, they had an assortment of Inflatable toys which made for good fun, he also got to reel in a fish that one of the adults had caught! After a couple of hours on the beach it was time for dinner, so Cole and I jumped in the canoe and paddled out to the motorboat. We were warmly welcomed and even offered a beer, and after some good conversation it was time to part ways. We paddled back to camp where we relaxed and cooked a dinner of jalapeno cheddar brats, caesar salad and corn pasta salad with of course, smores for desert.

The next morning Jameson got me up early to go fishing with his makeshift pole. We made ourselves back down to our rocky stairs and casted our hook with leftover hot dog as far as we could.  Once Jameson was comfortable he was actually quite patient, which was surprise to me, he is a busy boy. I found a nice place to put my chair where I could watch the fog lift off the lake. The clouds were a welcome site, this summer had been a hot one so the cool morning was a nice break from the heat, almost felt like fall was right around the corner. The lake was as calm as it gets adding to the serenity of the landscape. The sun was making its way over the Coeur d’alene Mountains, burning off the clouds as it warmed the earth. Morning light played on the greens covering the hill side and grasses along the edge of the lake. It was a pleasant morning, a time of day I typically don’t get to enjoy. After fishing we returned to camp, ate breakfast, then packed up to go.

With the canoe loaded we made our way east, across the lake, Cole was at the stern on the way out, and It took him a few minutes to figure out how to keep her straight, there is a learning curve. It didn’t take us long to reach a dock and floating latrine on the east shore of Killarney Lake. At the shore end of the dock we found a couple of nice boat in or hike in camps that would make make a great alternative if the island is taken. After a short break we were back in the boat and before long the entrance of the channel. Once back on the river we continued downstream and in a short while took a break. This time we didn’t pull over we just drifted  at a snail’s pace, downstream, while we snacked on snickers bars. It was another nice day and the temps began to rise, with less head wind today we could definitely feel the heat. We made quick work of the river and as we approached the take out we could see Medimont Mountain in the distance, a sign that the trip was coming to an end. At the boat launch we made our way to the shade and took a break before hauling up the rest of the gear. Eventually Cole fetched his stashed mountain bike from the bushes and made the quick 5 mile ride out along the trail of the Coeur d alene back to the put in and my pickup truck. Jameson and I stayed back, I lounged in the chair taking in the river and mountains while Jameson waded in the cesspool that is the lower Coeur d Alene River. From the put in we paddled five miles to Popcorn island, then paddled another five miles to the take out at Medimont and finished it off with a five mile bike shuttle back to put the in. What a great area to paddle, will definitely be back in the future for more adventures! For more pictures click the link. Killarney Lake Canoe Camp, Coeur d’Alene River, Idaho. 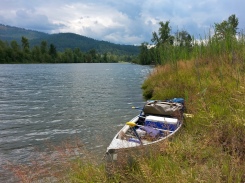 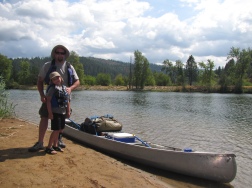 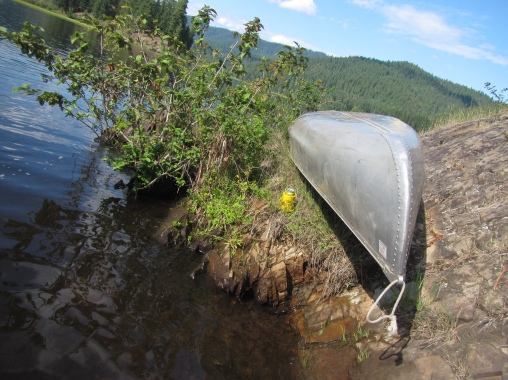 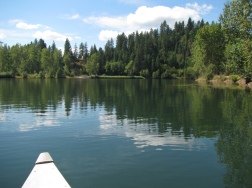 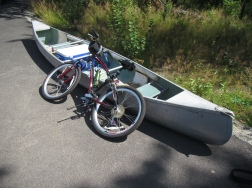