We woke up the next morning to another day of iffy weather. It seems whenever I plan a camping trip the weather has to go to hell, it has been one of the hottest summers on record but of course that all changes when I’m camping. We milled around a bit and debated a float but opted for a drive and hike instead. After packing some lunches we picked up the river road and turned up stream. We drove for some time before finding Flatt Creek Road (FS400), we turned left leaving the pavement behind as the road followed the creek for a ways passing several good camps before reaching a bridge over the creek at a left hand turn. We stayed straight as the road began to climb its way out of the valley. Eventually we did cross the creek and a short ways further found the trailhead for Centennial Falls at a hairpin turn at another bridge over the creek, five miles from the river road.
After rounding up the kids we hit the trail. This is one of those awesome trails that highlights all the finer features, nothing spectacular here, just an awesome walk through a very lush and green mossy forest. The trail, though steep was never too much for the little ones, they all fared well. After a couple switchbacks the trail swings around a ridge and then dropped a short ways to the magnificent waterfall. Situated in a picturesque setting Centennial Falls was much prettier than I had expected, water ran from everywhere following the moss covered cliff walls that provide the terrain for the falls to exist. The kids loved it, as did the adults. We each took our turn taking pictures in front of the cascade before calling it quits and working our way back to the trailhead. The kids had a blast which is all that matters, nothing like the expressions on their faces when surrounded by nature. The North Fork leaves much to be explored as I have only experienced the tip of the iceberg.
Back at the trailhead the kids had snacks as we lingered on the bridge enjoying the sound of the creek as it passed under our feet. Eventually we packed up and made our way back to the river where we continued upstream a little ways to a giant open parkland near the river that held a few more potential camps for future trips. Along the way we also discovered a cow moose and her young on the opposite side of the river, what a treat. Everyone got a chance to see them and none were more excited than the kids. We watched for as long as they would let us, but before long mamma had discovered us and with our cover blown they sauntered off into the deep woods.
Back at camp a few of us had decided to float the river through camp, the weather had improved only slightly, but it was still cool. The camp host thought we were nuts, shaking his head as we walked by with tubes in one hand and a beer in the other. At the upstream end of the campground is a nice beach for launching tubes and even rafts at higher water. Crystal, Branden, Jeremy, and myself stumbled across the slick rocks in search of water deep enough to carry us away. The river was very shallow, too shallow. We spent most of our time bouncing off the bottom and getting hung up on shallow rocks, but nonetheless we were on the water, and that’s all that mattered. We did encounter brief moments of success navigating the gentle current, and these were quite relaxing and almost worth the effort. Nearing camp some of us opted to run the small rifle near a rock face on river left, I did not, I had enough of dragging my craft. After picking up my tube I made my way over to Robin, Carrie, and the kids to enjoy a little time on the beach. After a little bit more rest and relaxation we made our way back to camp for dinner and eventually a fire before calling it quits. Fore more pictures click the link. Centennial Falls, North Fork Coeur d’Alene River, Idaho 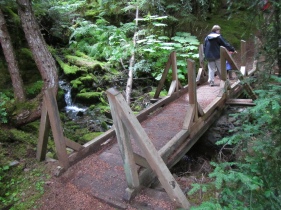 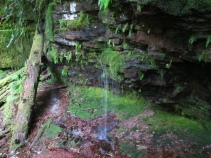