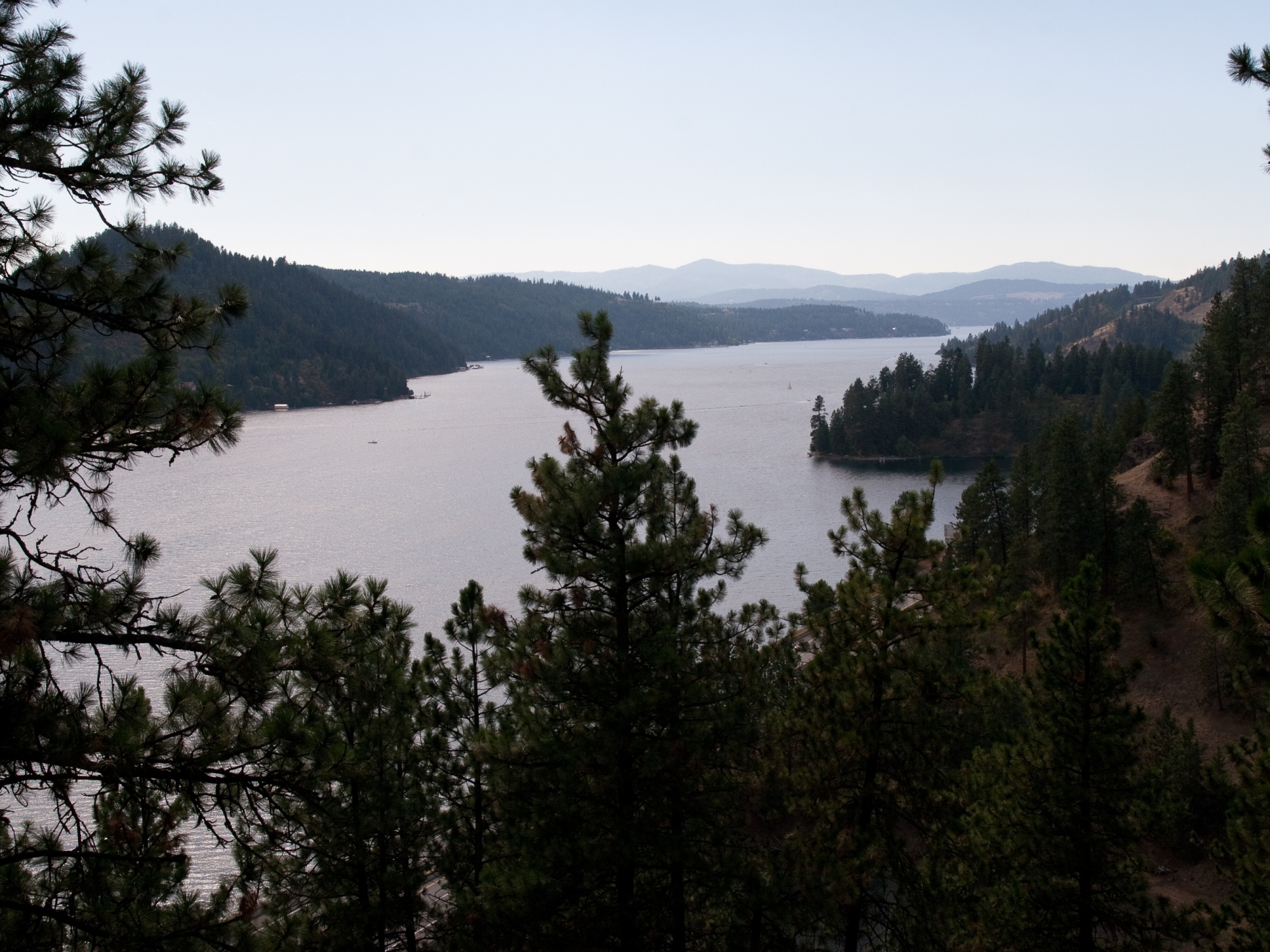 I had this day off, for no particular reason, but I figured I’d spend it somewhere outdoors. Robin had to work so she was unable to join us. We didn’t set any record getting out of bed but we did get up earlier than usual, 8am. After breakfast we hit the espresso stand for coffee and bagels before picking up I-90 east for Idaho.

We picked up the Wolf Lodge Bay exit and took a left, heading north to the stop sign where we went left onto Yellowstone Trail Road. After a couple of miles the pavement changed to dirt, and about a mile later we found the well signed trailhead on the right. We were the first and only car at the trailhead. After lacing boots, and shoes, we loading provisions and hit the trail.

The trail took off to the right angling uphill and heading east over gravel which quickly gave way to dirt. The grade was a bit steep for little feet and I already knew it would be way too steep on the way down, but like any other trail, I will deal with that later. A short way up the trail we encountered our first obstacle, a downed tree on a switch back, which unfortunately did cause a problem. After a couple of expected moans and grows from the little people we were back on our way, continuing uphill.  The trail is well marked with blue diamonds which I was thankful for because it gave the kids something to look forward to, almost a game of sorts, which I was thankful for. After a couple of switchbacks the grade became more manageable. The obstructed views of the lake below and environs attempted to make themselves present. We continued along the narrow path surrounded by tall grasses, Jameson and I were fine but Kylie on the other hand was not, most of the vegetation was at her eye level as she struggled to gain passage. It didn’t take long for the irresistible call of “daddy, daddy” to start coming my way for a free loading ride atop my shoulders.  We continued along the trail and soon passed under a giant ponderosa that was half felled. We moved quickly to pass beneath and shortly after that was a well placed bench at the edge of a pleasant meadow. We took a mandatory break here as I quickly entered the pack for goldfish crackers, raisins, fruit snacks, gorp and of course water. We talked and snacked and talked some more before it was time to go.

Back on the trail it didn’t take long before Kylie was back atop my shoulders. Soon after our break we found a junction with the orange trail which appeared to be true single track, perhaps something worth exploring, we went left. We continued along the blue trail and passed an old fence or coral on our left but didn’t point it out to the kids, wanted to keep the trail as wild as possible for the kiddos. Shortly after the junction with the orange trail we found the junction with the red trail, which was an old road that entered on the right. This would be the end of our single track as we continued east and uphill, again, this time on double track. The grade increased as we continued east, we walked the old road a ways before finding a blue trail marker that sent us north on more single track. This section of trail was very enjoyable,  and had a wild feel, I can’t explain the wild feel, but the senses were definitely heightened, you can never let your guard down in north Idaho. A short way along the trail we saw something cross the path and along closer inspection it was a tiny baby bird, the kids got a kick out viewing nature so close and personal. The trail eventually changed course as it continued in a northeast direction through a narrow draw, at the top of the ridge we went right continuing up hill. We were now traveling south along a ridge walk, I kept hoping for a view but it never came, unfortunately. I made a big deal as we approached the summit, this would be Jameson and Kylies first mountain top! Though unnamed, point 2795, is a blip on a topographic map, the kids didn’t care, they were just excited to be on the top of a mountain! We took another break atop a downed tree, the best thing about hiking with kids is all the snacks, keeps them moving.

After our short break atop the mountain we continued down hill off the summit through the trees, it was somewhere in here that Jameson said he saw a turkey, pretty cool and totally possible. Back on double track we made our way northwest completing a loop and eventually rediscovering our junction with the red trail, we went right staying on the blue trail. Again we reached the orange trail junction and continued downhill and eventually reached the trailhead. At this point we were well overdo as the mileage on the map didn’t jive with the GPS. I figured the kids were done but they were excited to see the lake, and even willing to hike there.

We passed through the turnstiles opposite the road from the trail head and entered a meadow, the sun was now low in the sky highlighting the landscape. Beyond the meadow we entered a young forest and eventually found ourselves heading downhill. We crossed one small creek that was barely flowing and eventually reached the lower trailhead. We had arrived at the lake, a pleasant reprieve. We took in the views, most enjoyable north into wild country. We basked in the warm sun and had more snacks along the slack waters of Blue Creek Bay. Our entertainment was a bird of prey that halted in mid air before diving into the lake for fish right before our eyes, a truly spectacular sight.  After more snacks we decided to head out, the trail back was pretty straight forward and as expected, our car was still alone at the trailhead. We covered 4.25 miles and almost 700 feet of gain, such good little hikers Jameson and Kylie are! For a lot more pictures click the link. https://www.flickr.com/photos/tannergrant/albums/72157647219272024 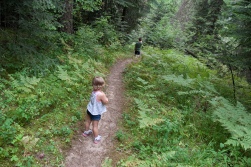