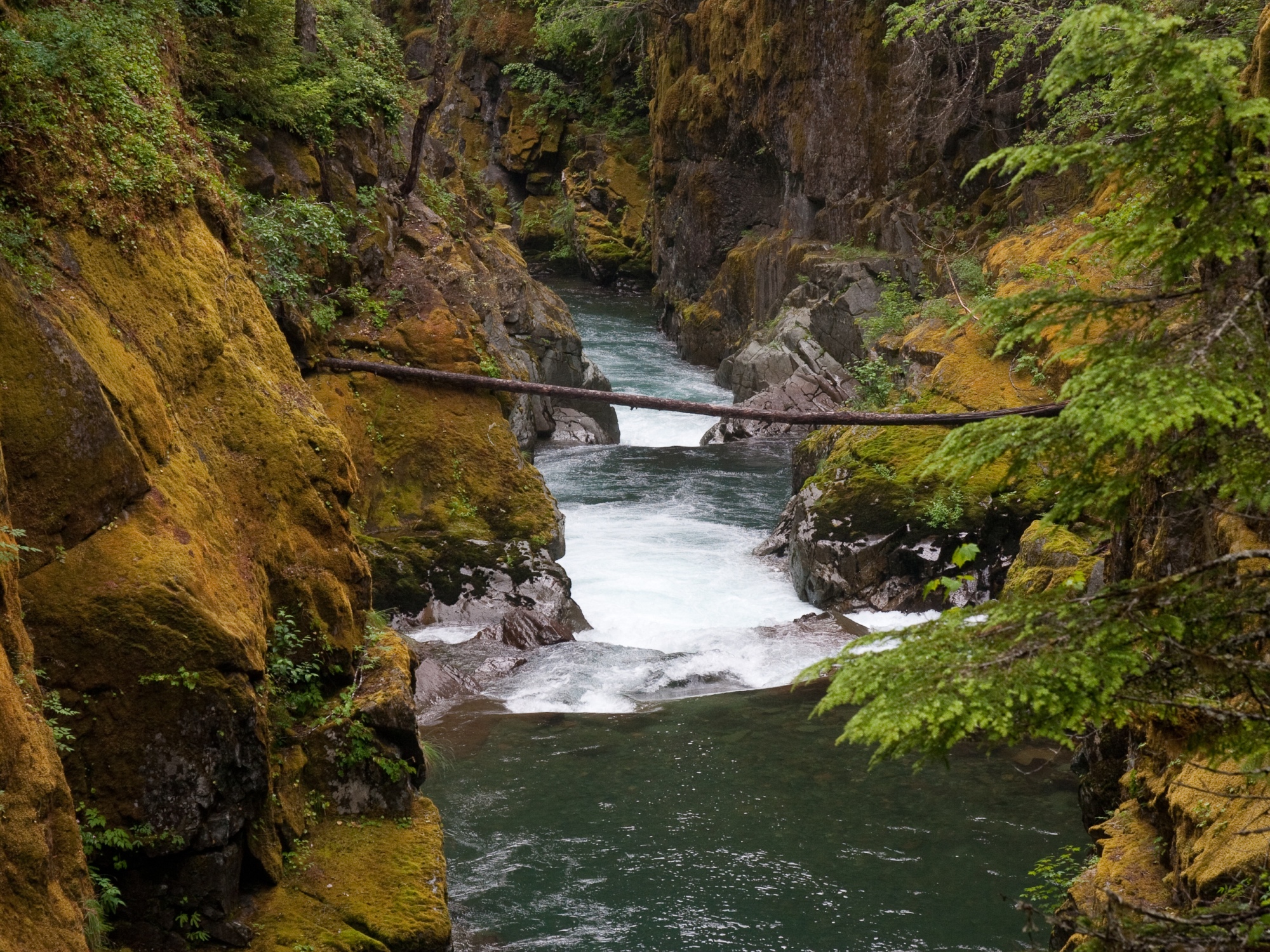 We awoke to rain, what a bummer, the last thing I wanted to do was crawl myself out of the tent trailer. I poked my head out and saw Jessica under the shelter at the picnic table and figured I better get out of bed. It was the Smiddy’s morning to cook breakfast, Eddie and the girls slept in while Jessica tackled the casserole. I got some coffee going for us while we huddled under the shelter hoping the storm would pass. It didn’t take breakfast long to cook, and eventually, unfortunately, burn. Jessica was bummed, and all the sudden I didn’t feel too bad for Robin for forgetting the pancake mix for our breakfast the next morning.  It was all good, as we then cooked their next morning’s breakfast of breakfast burritos a day early, which turned out to be fantastic! After breakfast I was able to talk Eddie into helping me shuttle my truck up stream to the trailhead for the Grove of the Patriarchs. I figured Kylie’s little two year old legs could make it at least halfway along our loop hike along the Ohanapecosh River. After waiting in line a short time to drop off the truck I was able to get a spot. On the way back to camp the rain let up and by the time we left camp, on foot, the rain had stopped!

We walked through the campground and reached a bridge over the Ohanapecosh River. This view is spectacular, a lush river gorge that crawled with various shades of green mosses. The blue green waters below were less than inviting on a cold rainy day but refreshing in their appearance alone. Downed trees lay across the river both up and downstream, navigation of the river would dangerous to say the least due to entrapment. Once across the bridge we turned left along the B loop and at the road end the reached the trailhead for Silver Falls.

We picked up the trail hiking upstream along its eastern side. Right off the bat I knew we were in for a real treat, there is nothing like moving your boots along an old growth forest floor. Being in the rain shadow of Rainier you still get more precipitation than any temperate rain forest in the Inland Northwest. We hiked along, generally uphill, and before we knew it reached a hot spring bubbling out of a hillside and down across the trail. A short while later we reached a signed junction for Ohanapecosh hot spring, we had to go right, I’m kind of a junky for hot springs. A short while up the side trail we were treated to a small pool, big enough to soak your feet or a small person at most, the water was warm enough, and I am not small, so we reluctantly moved on. Back on the main trail we continued up river and up hill.

The forest itself was just impressive, we were spoiled to say the least. We passed many moss choked side canyons over creeks on sturdy bridges which was a welcome treat hiking with the short legs of my two year old daughter Kylie. Eventually, we could heat Silver Falls in the distance, the cool thing about hiking a falls is hearing it first, kind of like shaking a present before you open it. Silver Falls is impressive, a two tiered torrent that is open at the top and than falls into a narrow chasm. Just below the falls we crossed the creek over the narrow gorge, the views up and downstream were amazing. Once across the bridge we went right, continuing uphill, now on the west side of the creek to a viewpoint situated above the falls. After taking in the view we continued uphill crossing below overhanging cliffs with a hand made wood rail on the steep creek side to protect you from the exposure. At the top of a hill the grade eased as we were now making good time, and after crossing a creek on a sturdy downed tree with handrails we eventually reached a road and the trail head for the Grove of the Patriarchs.

At the parking lot we encountered the hoards spilling out of tour buses and filing onto the trail by the droves, presumably from Japan or China. We made our way downhill along a trail as wide as a single lane highway. At the bottom of the hill we found a steep path to the river and took it. Robin passed me the children, then down climbed herself, bouncing over river rock we found a nice pebble beach along the banks of the shadowy Ohanapecosh River. Snow melt from high above churned at our feet bouncing fallen trees along the milk water as it made its way to the pacific. A mist along the surface near a downstream bend in the river left me curious. What’s down there? Oh the mind of a river runner. After our short break we gathered our tribe and made our way back to the trail.

We continued upstream as the trail began to narrow, we passed by and below some significant old growth trees before encountering our first and only obstacle,  a bridge. Usually a bridge is not an obstacle, but in the grove it created a bottleneck. The suspension bridge is only capable of holding one tourist at a time, and after a little wait it was our turn to bounce our way across. The bridge makes one feel a little exposed and those afraid of heights or moving water may find the hike to the bridge enough. Once across the bridge, the sky opened and at this point I did not have my rain jacket, standing below the massive evergreens in the grove was all I needed, and personally I didn’t mind the cool drops falling upon me, our senses along with our emotions are what allow us to live. Is one truly alive in a shelter under clothes next to a thermostat? Life is short, live a little. Before long we encountered a neatly constructed boardwalk that corralled the sheep into the direction of the giants from old earth. The trees are amazing, some of the most inspiring living things on the planet, to think they were here in the times of the middle ages is unbelievable.  We made the loop with our eyes to the canopy with everyone else, took the kids picture beneath a behemoth before making our way back to the trailhead.

On the way out Kylie’s patients came to a head wall as she was forced to ride my shoulders out. Robin drove her back to camp crying before passing out cold in a matter of minutes. Jameson and I took the long way back and hiked the east bank trail back to the junction with silver falls but instead stayed on the opposite side of the creek making a loop out of it. This trail is a joy to walk and one I would recommend to anyone staying at Mt. Rainier.

The next morning we awoke to more rain and some impressive thunder to go with it. We rode it out a while and after breakfast, when the rain continued, we decided to call it quits and pack up. We packed up quickly and tossed the mud covered gear in the back of the truck and got out of there. I felt sorry for the Smiddy’s as they had two inches of water in the bottom of their tent. On the way home we chased the same storm that ran us out of Rainier.  The same storm picked up speed across the Columbia Plateau and slammed into north Spokane at 60 miles an hour uprooting massive ponderosa pines and laying them like toothpicks across homes and power lines, luckily, no one was killed. Fore a bunch more pictures click the link. Silver Falls Loop with Ohanapecosh Hot Spring and Grove of the Patriarchs 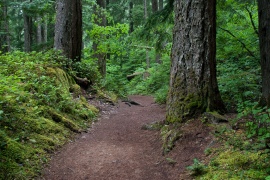 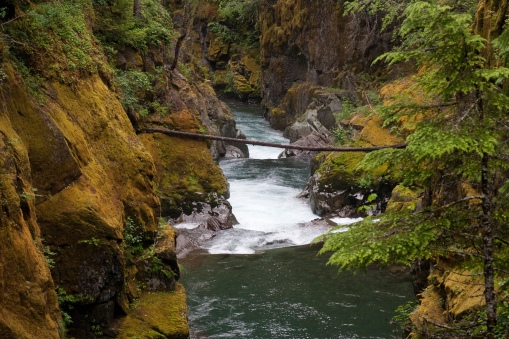 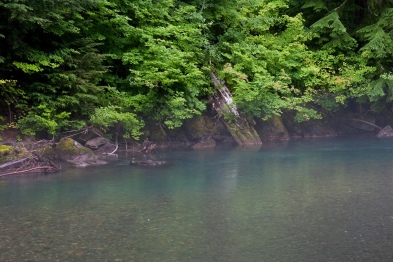