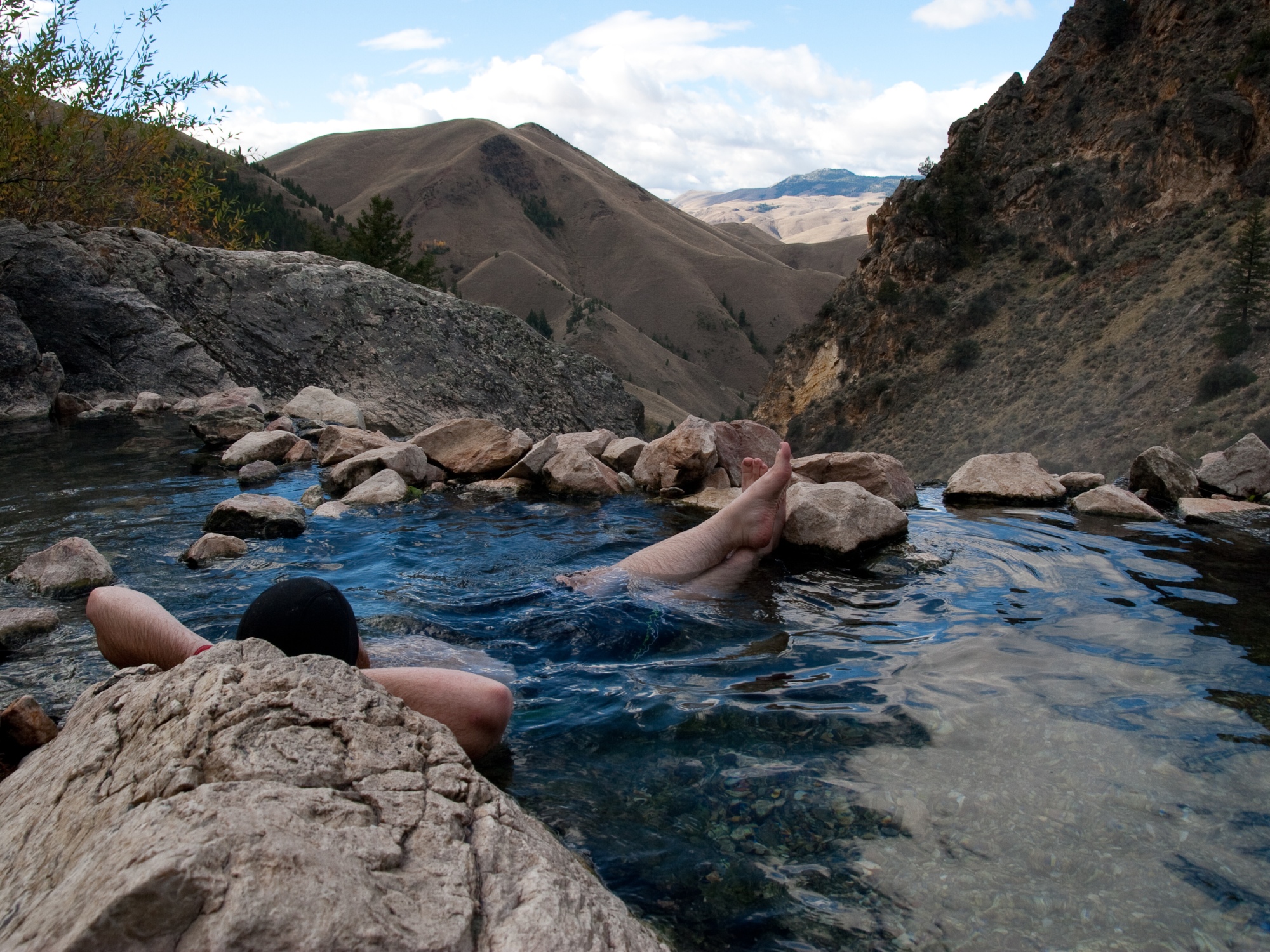 The alarm sounded at 6:45am mountain time. We hit snooze more than a couple times but were eventually out of the sleeping bags around 8am. Stepping out of the tent I was greeted to a dramatic sky with remnant clouds from last night’s storm and surrounded by snow capped peaks. The rich fall colors of the valley were saturated by the diffuse light from the sun through the clouds. Golden foothills were a blaze in the morning sun as it danced across the landscape highlighting the subtle features that one would normally miss. And at the heart of it all, the constant and continues waters of the beautiful Salmon River rolling on beside our camp. Salmon River country has a special place in my heart having rowed 150 miles of its course and hiked along it’s high ridges. Returning to the Salmon is like coming home to me.

After breaking camp we hit the road heading south on highway 93 for 18 miles to a left turn onto Warm Springs Road. We drove the road a short way and found the busy trailhead for Gold Bug Hot Spring on the right. In the parking lot we found plates from Washington, Idaho, Montana, Utah, Minnesota, and Wisconsin, which was pretty diverse for only 8 cars total. A lot of people know about Gold Bug and come from far places to soak in its amazing pools. After shouldering packs we made our way to the start of the path, right off the bat we were treated to an amazing view up the drainage that held the natural hot springs. After passing through a turnstile we began a climb of several switchbacks that quickly took us out of the valley floor.  Already the views began to open up, ahead of us Gold Bug Ridge with Poison Peak and the Lemhi Range dominating the landscape with the Salmon River Mountains including Sheep Horn and Iron Mountain behind us. Fall color along Warm Springs Creek choked the valley below below, the whole setting took our breath away. The trail leveled out for some time as we passed through another gate leaving private property for land operated by the bureau of land management. Before long the trail dropped as we entered a canopy of reds, and yellows where we crossed the creek on a sturdy bridge draped in fall color, leaves dotted the trail like flower petals from a stem and the creek sang with song birds in the brush.

Along the north side of the creek we entered a landscape covered in sage. Walking along the tall hardy brush, their pungent aroma played on our senses. Oh what it feels like to be alive and truly living. Among the sage we found a few juniper, a tree that I have grown fond of while traveling through the canyon country of eastern Oregon, I couldn’t help but grind it’s fruit between my fingers to indulge in its gin pine scent.  There was something about this place, it spoke to me as it cradled me between its canyon walls. I felt was as if I were being allowed passage, I felt welcomed. There must be a god for he has given me a gift, a gift to see the landscape like no other, a gift to feel it in my soul. I have tried to explain this to others but they don’t understand, they don’t see wild places like I do. Before long we reached the site of an old cabin, all that had remained was the roof, it’s better that way. Looking up, the massive head wall of Warm Springs Creek stood like a sentinel giving passage to those who seek it’s fortune. We crossed the creek again at a memorial for a loved one, what better place to be remembered. Once across the creek the grade picked up again, sometimes climbing rocks engineered into steps. The babbling brook gave way to ledges and waterfalls as we climbed higher, while the view behind us became more impressive as the canyon began to unfold at our feet. We eventually reached man made steps built from wood which were a welcome site, and before long we reached our first hot pool.

I couldn’t wait and hurriedly scrambled down to the creek to feel it’s warm waters. Steam began to rise from the creek as we hiked closer to the source, for the morning was still very cool. Climbing past more pools I discovered a somewhat recluse place to change out of my hiking clothes and into my swim trunks, and as soon as I had changed and hung my clothes Eddie rounded the corner. I hollered his way as I emerged from the trees to inform him of my changing spot, then made my way over the last bridge before dropping down to the main pool.  I settled down with a few others who were enjoying the hot spring, and eventually Eddie made it down too. We soaked for a while before most people had decided to leave, and with less people around, it gave us a chance to explore the pool a little further, which was rather large. On the the north side of the pool the water was about perfect and that temperature continued for most of the pool. Near the south side of the pool the temperature dropped a little but if you were willing to scramble over a few rocks a hotter, but very comfortable pool awaits. At the back of the main pool a couple of small waterfalls dump in creating the perfect setting. The water clarity was superb and the view down the canyon first class. It all felt to good to be true, and finally we had the place to ourselves!  We soaked for a while, a couple hours perhaps. Its was hard to leave paradise but eventually we climbed up from the pools to change before hiking out. The hike out was just as great as the hike in, like opening the same present twice and being just as excited the second time around. It’s hard to pull a kid from a candy store but eventually we reached the car. Gold Bug blew me away, one of the most amazing places I have ever been. For more pictures click the link. Gold Bug Hot Spring Hike 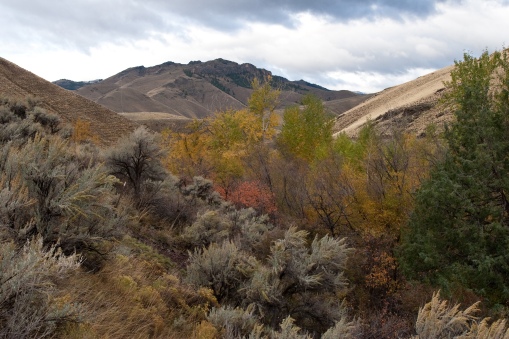 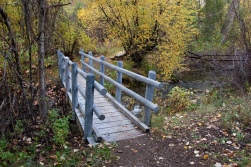 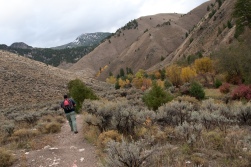 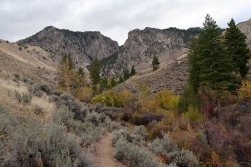 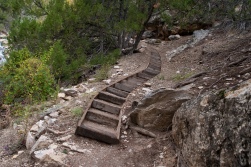 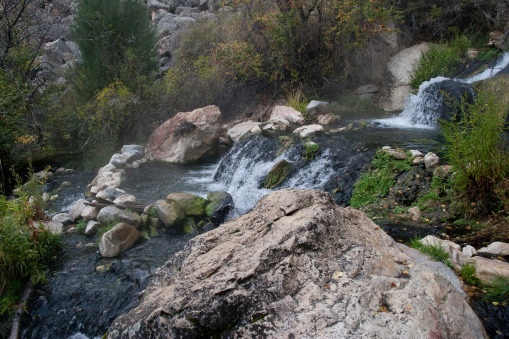 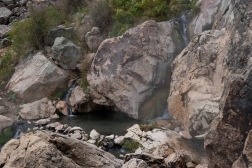 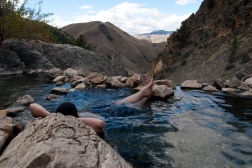 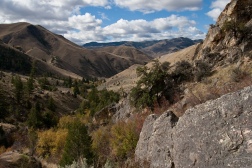