Eddie drove over the night before and this morning we hit the freeway about 6am, not bad. The weather went to hell all over the north cascades so I was able to talk Eddie into coming this way to hit the Bitterroot Mountains for some larch hunting. We made good time to Lookout Pass where we lost an hour as we entered the mountain time zone, and on the east side of the pass made a quick stop for gas in St. Regis, Montana. The rest of the drive went well with one last fill up near Hamilton, Montana before finding our turn off just before the small hamlet of Conner. From here the directions got a little sketchy as we drove up the highway looking for the signed turnoff that ended up being unsigned. Tired of the run around we finally just turned on the GPS to navigate to the trailhead. The drive from the turnoff to the trailhead was over good road, not as rough as the guide book described and even offered up one jaw dropping view into the heart of the granite laden Bitterroots. Eventually we reached the trailhead and found three cars that all turned out to be day hikers, not bad for one of the busiest trails in the Bitterroots on a good weather Friday afternoon.

We lingered a bit as we lazily finished packing before hitting the trail. With packs shouldered we hit the path and right off the bat were huffing and puffing. The trail didn’t waste time getting some elevation gain out of the way. It also didn’t take time to find the alpine larch in their splendid fall attire. Below the golden larch, reds, yellows, and oranges made up the forest floor which made even looking down at your boots rewarding. Soon we reached a field of granite talus where the trail climbed around it then leveled off a bit before reaching a spectacular view at a precipitous point along the ridge. Baker point, marked by a giant rocky pinnacle, is one to be admired and gave us a good excuse to pause in the warm sun to take in the view. Back on the trail we followed the ridge a ways before the trail veered left dropping below the ridge entering the Baker Creek drainage. It didn’t take long for big views to open up, both back down the Baker Creek valley and also toward it’s headwaters below the summit of Trapper Peak, the highest mountain in the Bitterroots. Soon we found ourselves back in the trees and in a short while passed some impressive granite boulders below a spectacular field of talus, one of those places in the trail that forces you to look up. Speaking of up the trail also began its final climb over the head wall below Baker Lake. We made our way steeply past alpine larch which were unfortunately beyond their prime, following the narrow boot path we climbed over and around pink slabs of granite to cairns that would take us to the outlet stream and last but not least, magnificent Baker Lake.

Baker lake is spectacular! I made my way around its right shore and found a place to drop the pack while waiting for Eddie. Baker Lake is the perfect size, and the view toward it’s opposite side and high above to Trapper Peak was splendid. It was the perfect example of the high country, and we had only just begun. After a short break we decided to haul the packs around the lakes left side below a shoulder of Trapper Peak in route to lakes higher up the basin. This idea quickly turned to failure as the steep massive field of talus we would have to traverse looked less than appealing, no big deal. After retracing our steps we made our way around the lakes right side to a camp on the other end of the lake. We decided to drop the packs here and day hike to the upper lakes with all the sunlight we had left. This would also make for a quicker hike out in the morning, this turned out to be a good decision.

Beyond Baker Lake we discovered a scenic meadow with a meandering creek cradled by thick mosses. Alpine larch stood guard in observation of the splendid arena, a real show of mother nature’s finest, bravo! Beyond the meadow the trail got back down to business as it climbed steeply toward Middle Lake. In a few places we found ourselves crawling over and around massive chunks of granite requiring two hands in places to navigate, but in the ended, we were rewarded. Middle Lake is a stunning destination! I boulder hoped pink slabs of granite over its outlet to a commanding view. Beyond, the far shore was a broken horizon of jagged peaks forming a formidable chasm of granite. Bathed in the low light of the late afternoon sun it was hard to put into words just how beautiful a scene it was, you must see it In person! We still had one more lake to see. Eddie went on ahead and chose a higher route to the right that would allow him to drop into the upper lake basin. I took the much easier, but still steep boot path staying close to the outlet creek coming down from the upper lake. Views along the way were amazing, granite boulders dotted with alpine larch and a chain of waterfalls to keep you interested. Finally, we climbed over the last head wall to serene Gem Lake, the crown jewel of the chain of lakes, and well worth the extra effort. I found a spot at the lake below a grove of alpine larch to take a break. We didn’t stay long as we were beginning to lose our daylight, and comfortable temps for that matter. Fall was definitely in the air, especially over 8,300 feet above sea level.  Back on my feet I wandered toward the outlet to take in the magnificent view below me, at my feet was Middle Lake and to the right the massif of imposing Trapper Peak. In the distance massive ridges of granite gave way to a dry Bitterroot valley below, and beyond toward an endless sea of mountain tops, what a view! After saying goodbye to Gem Lake, we quickly but carefully made the descent to Middle Lake, and eventually, the glorious meadow with meandering creek. I paused again to take it all in, how could you not. Now back at Baker Lake we shouldered the packs and made our way to camp near the lakes outlet stream.

We quickly pitched the tent, hung a bear line, and gathered some wood. Surprisingly, the way the canyon is oriented to the sunset we were able to get most of the chores done before dark. Finally, the sun slipped behind the ridge as we prepared dinner. We capped off the evening with a nice little fire below a magnificent show of stars, and as the moon began to rise we were off to bed. Overnight the winds picked up, the high gusts kept me up in anticipation of a widow-maker. In the morning we packed up while the winds continued and hit the trail. Once in the protection of the trees below the lake we were much more comfortable. After making quick work of the trail we found ourselves back at the trailhead where we changed clothes and ate a snack before hitting the road in the direction of Salmon, Idaho. We stopped for coffee at gas station before making the grueling climb over Lost Trail Pass saying goodbye to Bitterroot country and hello to Salmon River country. The Baker Lake basin is a spectacular place to visit, just don’t plan on having all to yourself with three easy access lakes. We covered around 5 miles total with about 1,500 feet of elevation gain. For more pictures click the link. Baker Lake Backpacking Trip 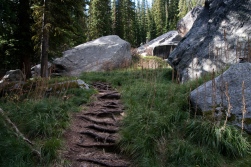 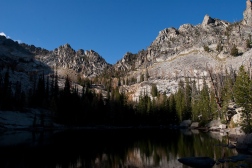 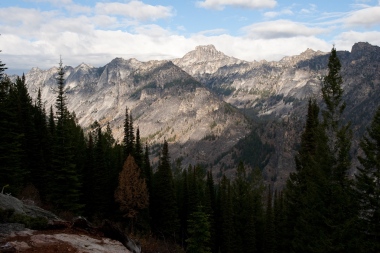