We got a slow start this morning, needless to say yesterday’s yard sale took its toll. We left town around noon reaching the boat launch for kidney bean shaped Rose Lake in the Coeur d’Alene Mountains about an hour later. Rose lake is a medium sized lake at 371 acres and sits at 2,142 feet in elevation, its tucked away near the bottom of a small group of mountains that extend west to the east shores of Lake Coeur d’ Alene. To the southeast runs the Coeur d’ Alene River and beyond to the St. Joe Mountains. The chain of lakes gets its name from several lakes in the basin that are connected to the river via small thorofares creating a chain of lakes, though Rose Lake itself does not have a water trail connecting it with the river.

After loading provisions and rigging kayaks we departed about 2pm from the public boat launch located along the east side of the lake. We paddled southwest from the boat launch through lily pads to open water passing an undeveloped lakeshore. Rose Lake is a paddlers paradise, even with private property and motorboats this place is very quiet. We only had one boat at a time running a motor during our paddle, so noise and slapping wakes were not an issue. The weather was stellar, blue skies and hot, we often dipped our hats in the water to use like mops to cool our legs and heads. We continued along the lakeshore passed beds of lily pads before reaching a stretch of private property. The winds were beginning to really pick up as we entered the most exposed portion of the lake where if not paddling we were actually blown back up the lake. The kids began to struggle against the wind so I tied Kylie up and towed her for a bit. Jameson too began to struggle but kept up as best he could. I soon realized it was gonna be difficult to circumnavigate the lake against the wind, so I opted to cut a corner and make way for the opposite side of the lake prematurely using a prominent mountain peak as my target. We pressed on as Jameson slipped back a ways, I checked on him often to make sure he was ok. The wind was making it hard for me while towing Kylie, eventually we did reach the opposite side of the lake where I untied Kylie and buried our kayaks in the lily pads to use as an anchor to keep from blowing away while Jameson caught up. Once regrouped we took a break to rest the arms for a minute. I gave Jameson a break and towed him up the west side of the lake, he’s such a trooper.

The kids were eager to swim, but we were struggling to find a good beach. In the distance we could make out what looked like a possible swimming hole and made our way towards it. We arrived near the barren shoreline but it was guarded by thick lily pads, we put our heads down and paddled hard full speed ahead to reach the small patch of dirt. We made it to the shore of the lake where after exiting our boats onto the small beach unfortunately found no room to swim, what a bummer. Our only complaint about Rose Lake was the lack of a good beach to play in the water, the entire lake was lined with lily pads. From our small beach we looked across the lake to the rugged crest of the St. Joe Mountains anchored by the 6,400 foot summit of Latour Peak. The view east across the lake is by far more scenic than from the other side looking west. Just before leaving the beach I tied all three kayaks together for the final push back to the boat launch. On the count of three we all worked together to storm through the lily pads, it would have been very difficult to untangle ourselves if hung up with all three boats tied together, lucky we made it.

It was a bit of work for me to cross the lake towing three kids holding paddles but eventually we were in the safety of the docks near the boat launch. I had the kids stay with the boats while I brought the truck around before I finally let them swim while I loaded up all the gear and boats. After the swim we finished our sub sandwiches before hitting the road. Rose Lake was a pleasant surprise, a lake I would definitely recommend or paddle again myself one day, except next time I will bring a fishing pole. We covered about 2.5 miles which should have been a breeze, except for the wind, no pun intended. For more pictures click the link. Rose Lake Kayaking Pictures 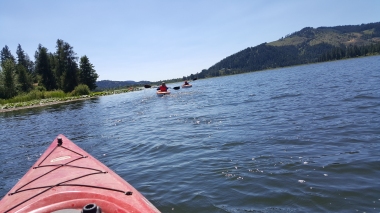