We took our time waking up and gather our things to load the car before checking out of the hotel and catching another breakfast at the Bridgeside Cafe nextdoor. After another awesome breakfast we made our way back across the Bridge of the Gods into Washington and turned left heading west on highway 14. A few miles down the road we pulled into the trailhead parking lot for Beacon Rock.

Just getting out of the car was a chore due to the fact the parking lot was a sheet of ice! We all carefully made our way to the rear of the vehicle where I thankfully had some winter clothes left over from a recent snowshoe adventure in north Idaho, we layered up as best as we could and hit the trail. We must have been in a wind tunnel between Beacon Rock and Hamilton Mountain making the breeze downright unbearable. I quietly thought to myself there is no way in hell my family is gonna go for this hike. I could already here the grumbles under their breath as we made our way to the trailhead. This hike has been on my radar for years, and it was definitely on the brink of falling apart.

We made our way past trailhead sign and picked up the icy path near the rock climbing area as we entered a shady forest. We moved along carefully over the icy trail making our way counterclockwise around the giant rock, as we approached the west side of the monolith we broke out into the sun, the winds let up, and almost instantly the conditions were quite pleasant, thank god. It didn’t take for us long to reach the manmade handrails along the exposed terrain which were a must when the ground is slick. A few boots had gone before us this morning compressing the powder snow into a trail of ice. We poked along, taking our time, Kylie and I quickly realized we would be holding hands the rest of the trip, we had the switchbacks down in no time, she would cross in front of me as we simultaneously switched hands in order to keep her precious little body on the inside of the trail leaving most of the exposure up to this old shmo. We were doing good until we reached our first ice covered wooden bridge, this bastard was slick, it took everything we had to cross it safely, and once across we seriously considered turning back, but Robin and I just couldn’t bring ourselves to do it, so we made the irresponsible decision to press on.

Kylie and I continued the same routine up the rock, holding hands, trading places at switchbacks, and crossing icy bridges before the trail made its way around to the east side of the rock and in short order reached the summit!  Jameson and Robin made the trek with ease even though Jameson made me a little nervous with how confident he crossed the most exposed areas, even a subtle slip could have been disastrous. Beacon Rock, named by Lewis and Clark, offers some amazing views. To the east lay the mighty Columbia River all the way to Munra Point, and to the north the lofty summit of Hamilton Mountain which begged for further exploration. We didn’t linger too long on the summit of the 848 foot tall monolith before heading down, temps were a bit chilly when you were not moving.

I had never seen the area covered in a dusting of snow before, it was a very breathtaking sight to behold. We made our way down, carefully. The sun felt good on our faces, even if the temps lingered around freezing. The trail around Beacon Rock is an absolute marvel, one every person in the Pacific Northwest should see in there lifetime. Once across the final bridge we left the guardrails behind, and as luck should have it, not a minute went by after Kylie and I stopped holding hands that she slipped, fell, and landed straight on her tailbone.  She hurt herself bad enough to bring herself to tears and earn a worthy bruise, poor girl. Needless to say we were all relieved to arrive back at the trailhead to enter the car and crank the heat. We quickly hit the road back toward Spokane but not before stopping for beer and grub at Ice Harbor Brewery in the tri cities. We covered around 1.5 miles with perhaps 600 feet of elevation gain, well worth the effort, even if the trail is covered in ice. For more pics click the link. Beacon Rock Hike 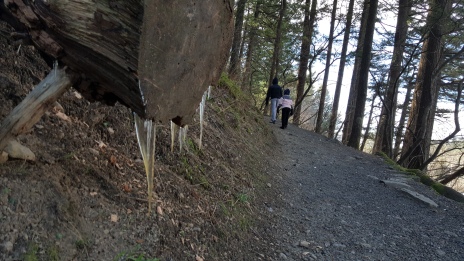 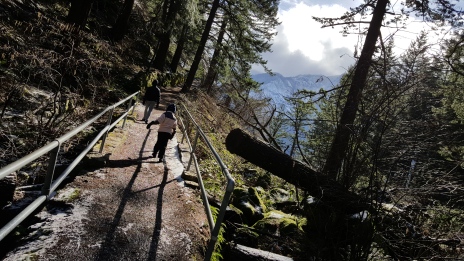 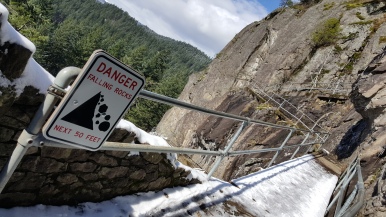 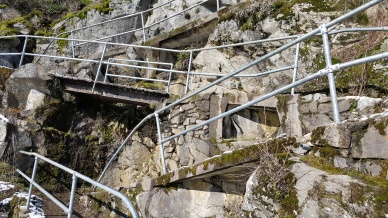 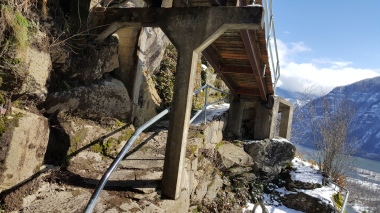 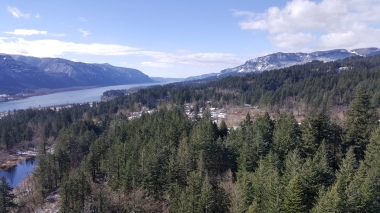 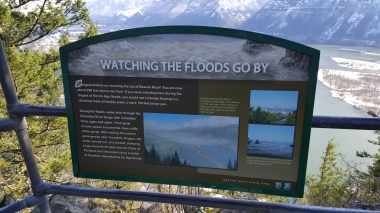 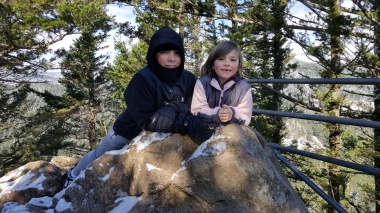 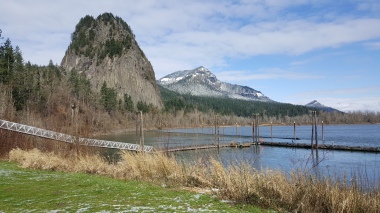