First thing in the morning we zipped into town for breakfast at Teezers Bakery for their delicious breakfast sandwiches and fresh coffee, both of which didn’t disappoint. After breakfast we toured a couple more shops downtown before loading up and heading to Moran State Park. I tossed and turned for where to hike today and finally decided to stay low since the weather was a little crummy and rain was likely. Moran State Park is amazing, typical of west side natural places, it doesn’t get any greener. We parked at the day use area for Cascade Lake then loaded the packs, donned the rain gear and hit the trail.

We picked up the loop trail hiking counterclockwise, we didn’t make it but 100 yards before the kids discovered Moran Creek below a hikers bridge, not in a hurry we let them explore as they made believe small sticks and pieces of wood were vessels descending a river to the sea, it was fun to watch. One of the beauties of having children is reliving your own childhood memories through their experiences, you can’t help but feel like a kid again. Back on the trail we continued around the north end of the lake which was rather windy as the weather was pushing up from the south.  As we approached the lake’s west side we began to climb allowing the views to open up, high on the cliffs above the lake we took advantage of the many rocky outcroppings to explore for whatever else might be discovered. At one such place we discovered a lone gnarled Douglas fir tree that looked to have taken a beating from mother nature for as long as it has been in existence, still she holds on, stubbornly. She reminded Robin and I of a bonsai tree for the unique shape she has taken over the years. After bidding farewell to the bonsai tree we continued on and in a short while descended to a sturdy bridge that separated a small body of water from the main lake that begged to be paddled, this would make for a great place to take a kayak.

Once across the bridge we continued left around the lake through dense forest before reaching a campground. Robin and Kylie had to use the bathroom so I took advantage of the opportunity to greet a local, an old boy from Burlington, turns out he used to work in the Colville National Forest and actually built the trail up Hoodoo Canyon connecting Trout and Emerald Lakes, a trail that Jameson and I had hiked in the past. I thanked him for his service and praised him for a job well done before we went our separate ways. Back on the trail, which was actually a road at times or paved path at others until we reached Olga Road and crossed it regaining a true dirt path. By now the weather had taken a severe turn for the worse, and to be honest I was getting a little worried, Kylie was hitting a wall as we entered an exposed open forest that was littered with fallen trees, and with the winds the way they were I did my best at urging along the group without trying to scare the hell out of them. Kylie got the message, as did the rest of my family as we scurried up a hillside where the trail entered a healthier more dense forest of older growth trees.

We continued along the trail crossing a creek and passing some mossy boulders along the way, somehow we got side tracked and took an unintended side trip to a dead end at a crossing of Cold Creek before having to backtrack a short ways to the correct trail. Once on the right path we made quick work of the windy trail, now in the open we made a dash for the car while being pelted with stinging pine cones as we quickly escaped the rain for the comfort of the dry and windless vehicle. It was obvious mother nature was telling us we were done hiking for the day. We drove straight to town for an impromptu lunch at the Madrona Bar and Grill. Robin and I each had a bowl of chowder and shared some of the kids fish and chips while playing witness to the amazing storm battering the opposite side of our window, the entire restaurant was vibrating, it was impressive to say the least. It was amazing watching the waves crash over the rocks below, washing away driftwood trees like toothpicks. After lunch we explored some more of the shops in town and eventually made it to a dinner reservation at Majitas Mexican Kitchen where we had some of the best Mexican food and margaritas we had ever had. The Cascade Lake Loop makes for a great hike with kids, we covered about 2.7 miles total with maybe 200 feet of elevation gain. For more pictures click the link. Cascade Lake Loop 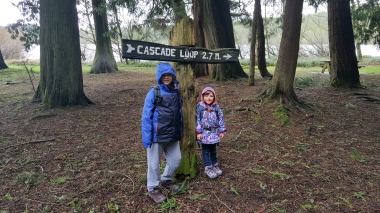 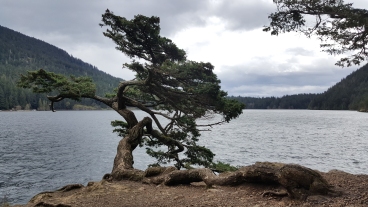 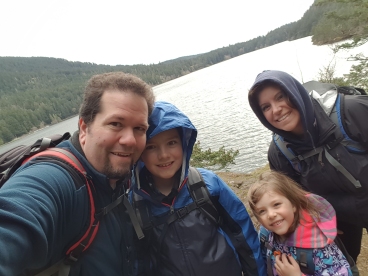