We got a later start than I really wanted, but that’s what ya get when you have a group of eight coordinating a hike together. Martha and Russ came to my house, then we picked up Wally before hitting the road east. We made a quick stop in Post Falls for breakfast and coffee at Starbucks before heading north to Bonners Ferry and eventually the trailhead ten miles up Myrtle Creek Road along the east slopes of the Selkirk Mountains. Myself, Martha, Russ, and Wally were day hiking, while Cole, Damon, Wes, and his son would be spending the night. It was hard not to notice Myrtle’s Turtle looming above the trailhead, a massive dome of granite high along the Selkirk Crest. We picked up the well signed trail along an old road heading uphill. Robin had my itinerary so I opted not to register at the National Forest registration box. The grade was nice and the trail wide, we often walked side by side along the lower reaches of the trail. Fall color was definitely in full swing in the high country as we made our way past vibrant patches of yellows, oranges, and reds.

The trail spent most of its time ascending the north side of the Slide Creek drainage. Nothing to steep hear, just a nice steady grind past some big chunks of granite here and there and over some well constructed boardwalk. The weather was cool with overcast skies and a chance of rain, perfect hiking weather. It was cool enough to keep from getting too hot while on the move, and just chilly enough to need a jacket when you stopped. Eventually the trail got down to business, as it began to gain most of its elevation. We made a traverse south and eventually crossed a dry creek bed at the head of Slide Creek. I could see where this might be a tricky creek crossing in the spring. As we climbed our way to a notch between two lumps of rock we began to get some views toward the granite headwall and birth place of Slide Creek. To the east lay the entire Slide Creek drainage, and beyond to the mighty Kootenay River flowing north into Canada. After the last short but steep push we found ourselves at an unnamed pass separating Slide Creek and Two Mouth Creek. Interesting enough, Two Mouth Creek drains west to Priest Lake, then the Priest River, and eventually the Pend Oreille River.

We dropped the packs at the pass and took break. I looked at the area via Google satellite before our hike and figured the scramble southeast to the summit of Myrtles Turtle would be a good choice. We lingered a little, debating our options as an old man and his son approached us coming up from Two Mouth Lake. After greeting the couple we talked about the area, the young man told us of a time when he scrambled the northwest ridge and that the views from the summit were worth it. Needless to say, that’s all it took to convince this crowd. Off we went, pushing through the branches to a granite outcrop with magnificent views to the south toward Harrison Peak, and west toward our objective, point 7,001. We took a break and gawked at the view. This was far enough for Rich, Wes, and his son. They decided to turn around and follow Damon in to camp at the lower lake. Myself, Wally, Martha, and Cole pressed on, where we eventually reached a point where the terrain required the use of our hands to continue. I dropped my pack and trekking poles then immediately made a couple of lightly exposed moves over an obstacle.

Soon we had found ourselves about halfway up the mountain, we took a break and adjusted our layers while discussing our route. We angled left traversing the south side of the ridge over tall slippery grasses and shifting granite boulders, the going was tough requiring me to take breaks along the way to catch my breath, but eventually we did gain the ridge picking our way a short ways north. It was starting to get late, but the summit was within our grasp, maybe a half hour away. Reluctantly we had to called it quits, we were so close to looking down at Kent Lake, a destination in the Selkirks I’ve always wanted to see. There is no trail to Kent Lake so I had hoped to at least be able to look down on it one day, but today would not be that day. I was OK with it, a feeling I have become more comfortable with as the years pass, it’s alright to let common sense and experience guide you through the backcountry. I have spent a lot of time exploring wild places, with many more adventures to come, so no need to get greedy. We admired our achievement and were awarded views of Chimney Rock, Mount Roothaan, Harrison Peak, Myrtle’s Turtle, Two Mouth Lakes and the entire Slide Creek drainage from its granite headwall to the Kootenay River Valley. After deciding to make our descent we carefully picked our way through the boulders and steep grass, about halfway down Martha disappeared into giant hole tucked away in the brush, stuck like a turtle on her back with all fours flailing about as she laughed. After realizing she was okay we joined her in a good laugh. We helped her up and continued on, eventually finding the exposed section of rock and shortly beyond that, my pack.

As we approaching the pass Martha realized she had lost the 12 dollar sunglasses she had just purchased at a gas station on the way to the trailhead. Her disappointment was quickly erased by Coles expletives as he just realized he lost his pistol in the scramble. Suddenly Martha didn’t have anything to complain about, as we were all shocked to learn about Coles gun. Back at the pass we discussed the situation, I was only out there for the day and had driven three people to the trailhead that I had to get home, and it was already getting late. Cole said he had to go back, and I understood, but really felt he should have gone for it in the morning, with that, we said our goodbyes. Cole disappeared though brush heading up, while we made our descent to the lake.
As we approached the first lake we could make it out through the trees, and took an obvious side trail to the lake shore. Suddenly rain began to fall, but a very light rain, not even hard enough to feel it, just enough to see its drops upon the surface of the lake. The lower lake sits in a magnificent setting, to the south was the granite headwall of the Selkirk crest, and to the west the ragged ridge we had just descended, and the same one Cole was again crawling upon, I wondered where he was. A shallow mountain Lake surrounded by a lush thick carpet of moss on all sides gave the place a magical feel. If leprechauns exist, this is the perfect place to see one. Fingers of moss covered land poked their way into the lake giving it a sprawling presentation with small coves tucked away here and there. After taking it all in we made our way to camp where Damon, Wes, and Rich were socializing. We enjoyed a light lunch and brew while laughing and telling stories. It was nice to be out with Wally, Martha, and Damon, all people I really enjoy spending time with in the woods.

After our lunch we decided to pack it up and head to the upper lake to check it out. We found the inlet creek and the trail along it. Following the small stream was a real treat as it meandered it’s way through some of the most beautiful mountain meadows I had ever seen. I took my time, falling a little behind taking in the breathtaking scenery. It’s places like this that really get to me, truly magical. Eventually we reached the upper lake, which is quite different from its lower lake. The upper lake is the bigger body of water, and lacked the mosses and meadows surrounding the lower lake. We followed the lake shore a ways to a magnificent view to the far side of the lake and the granite backdrop of the Selkirk Crest. We hung out taking it all in but before heading out. We decided to make a loop of the trip taking a trail into the woods and over granite slabs and cairns back to the lower lake.

While saying our goodbyes, Cole came around the corner, and unfortunately he was empty handed, no luck in finding the pistol. It was late, so we departed making quick work of the climb back to the pass. At the top we took one last break before getting out of there. We made quick work of the hike out, except for my yard sale faceplate that sent me to the ground in a split second. After collecting my trekking poles, we all shared a good laugh at my expense before reaching the trailhead. We packed up, and hit the road, making it to Bonners Ferry after a quick stop to admire the spectacular sunset behind us. What a great day in the woods with great people, and a tasty burger at the Kootenay River Brewery was the perfect way to top it all off. Two Mouth Lakes is a wonderful place to explore. I love the granite mountains of the Selkirk Range, one of my favorite places to ramble. We hiked about 10 miles total with around 2,500 feet of elevation gain. For more pictures click the link.  Sunset pictures courtesy of Damon Dery. Two Mouth Lakes Hike 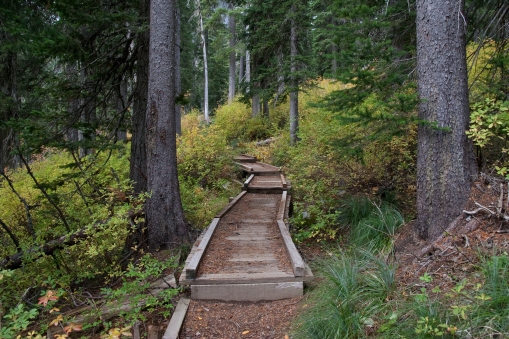 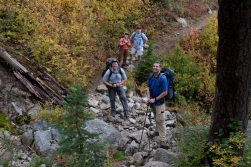 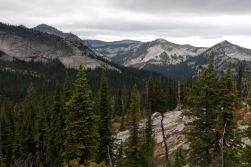 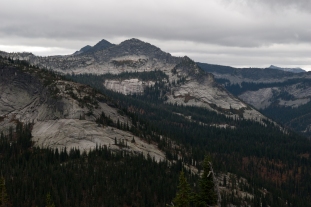 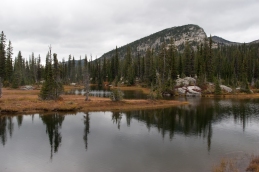 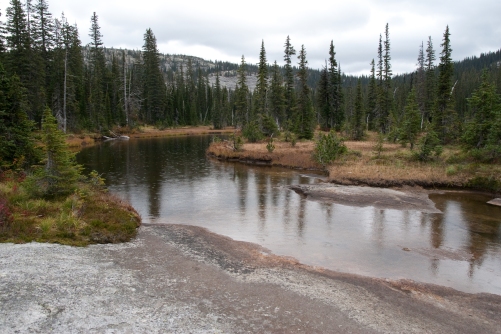