After packing up and heading out of Ozette we made our way toward Near Bay on the Makah Indian Reservation. We stopped at a gas station that we thought was on the reservation, turns out we were wrong. We obviously struck a chord with the girl working the register when we asked if they sold parking passes for the reservation when she leaped into a tirade about the tribe and their shitty rules. When I asked to use the restroom she informed me that they had no plumbing, whatever.  Back on the road we eventually reached the reservation and acquired the parking pass at the small general store. Near Bay has more stray dogs than any other town I had ever visited. Back in the car I followed directions to the trailhead. We got one of the last spots in the parking lot, quickly we loaded provisions and resupplied our packs for the hike into Shi Shi Beach. It is strongly advised not to park at the trailhead, so I drove back down the road to someone’s private property where I parked on their lawn and paid the 10 dollar a day parking fee to avoid having my windows smashed. I made quick work of the half mile road walk back to the actual trailhead where I found Cole, threw on the pack, and hit the trail.

The forest along the trail looked a lot like the beach trails at Ozette but with a lot less boardwalk. Not long into the trek we reached and interesting creek crossing at Cullivar bridge. Instead of being flat or having a gradual arch there were two separate 45 degree ramps that met in the middle to form a 90 degree angle where it transitioned from uphill to down, never seen anything like it before. We passed a lot of people on the way out, and most of them didn’t look like your typical backpackers, there must have been one hell of a party on the beach last night. I even saw one kid carrying a mister buddy portable propane heater. The trail stayed relatively flat on its way to the beach, sometimes on trail, other times on old road but all junctions were well signed. As we approached the beach at portage head we were offered our first view of the magnificent coastline. At the bottom of the precipitous cliff below us sea stacks and rocks littered the surf. We passed on, and quickly found a sign marking the National Park boundary, from here the trail dropped steeply with rope to assist a controlled fall to the beach far below.

We passed a good camp in the trees then stepped out onto the sandy beach. The first impression was stunning, what a beautiful setting. We wandered right, heading north a short way to a driftwood bench that we used to have lunch on. We sat, enjoying our view and listening to surf pound away at the rock formations in front of us, in the distance we could make out the point of arches to the south. It’s sea stacks begged for a closer inspection and exploration. After lunch we cached the packs in some tall grass at the base of a cliff and walked down to the surf to explore the rocks at low tide. We ventured out a ways over barnacles and past tide pools choked with sea an enemies and other marine plant life. Waves crashed at our feet, reminding us that this was there house and the surf could take us at any moment if we didn’t respect it. We explored out as far as we felt comfortable admiring the breathtaking but foreign landscape, a place I don’t get to appreciate often enough. Enormous and unique rocks carved by the crashing waves of the surf served as a fortress to protect the land from the eroding waves that pound endlessly. After taking in the views we retreated to the comfort of the beach and took a short trail up to a divide between the two Sandy beaches. To the south we could make out the Point of Arches, and to the north a gem of a beach with its own personal collection of magnificent sea stacks. One of the prettiest beaches I have ever laid eyes one, truly stunning. Reluctantly we decided to head south, in the direction of the only reliable water source at Petroleum Creek. We had ran into a couple older ladies who gave us some beta on a wonderful place to spend the night named “Gr 8 Camp”, and that it was. We soon found the camp which was loaded with character. Just beyond a picket fence was a sign in the shape of a shield engraved “Gr 8 Camp”. Just beside the well built lean-to was a giant log that served as a bench to sit on or organize gear, it also made a nice wind block for our tents that we pitched directly on the beach. Beyond an arched entryway adorned with a green fishing net and lures we stepped into a cozy shelter that was quite robust, one capable of withstanding some strong offshore winds. After setting up camp we decided to check out the point of Arches while the tide was still out. We walked the beach, enjoying the weather and the views. It took awhile for the morning fog to burn off but eventually the sun was on our faces and the temps warmed up. Along our walk we discovered Petroleum Creek, an interesting name for our only reliable water source, but at least it had pools and was flowing. Continuing on we eventually reached the massive sea stacks and rocks referred to as the Point of Arches.

With the tide still somewhat out but definitely on the rise I had to be careful walking into the surf to grab a few pictures. I was being lazy and didn’t want to take my boots off and at one point almost paid the price as a rogue wave almost reached the tops of my boots. I thought for sure my socks were wet but miraculously it was just the chilly water on the outside of  the boots that made my feet feel suddenly cold. After my retreat to the beach I continued south past some impressive sea stacks and around a few boulders that at least twice a day is covered by water at high tide. I took my time exploring the nooks and crannies of the very beautiful and impressive landscape. The rocks are what make the area so dramatic, along the beach your surrounded by these fingers of black rock topped with green grasses and dwarfed trees that somehow bear an existence in such a harsh environment. Offshore more islands of rock stand guard to the coast as to offer protection to its beaches. After lingering for some time we wandered back to camp for dinner.

After supper we caught a magnificent sunset along the northern terminus of Shi Shi, one that I will never forget especially since I ultimately fell victim to the surf as the rising tide sent a wave over the tops of my boots to almost my knees leaving me with soggy boots for a squishy walk back to camp. In camp with the chores taken care of I put on some dry socks and lounged out in my camp chair watching the stars upon the sky and the marine mist roll by the light of my headlamp. After a couple glasses of wine we called it quits, we had a big day and decided to turn in early.

The next morning we woke to a heavy fog and soaked rain flys, I couldn’t believe how much condensation had accumulated above my tent overnight. After breakfast we broke camp and got out of there, we had a long drive home and the Snoqualmie Brewery in Snoqualmie was calling our name. The Olympic National Park wilderness beaches offer a unique experience for the backcountry camper, one that I will never forget and hopefully be doing again sometime soon. I highly recommend it, especially during summers when all of eastern Washington is on fire. For more pictures click the link. Shi Shi Beach Backpacking Trip 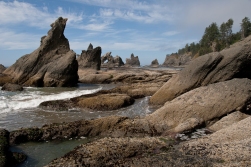 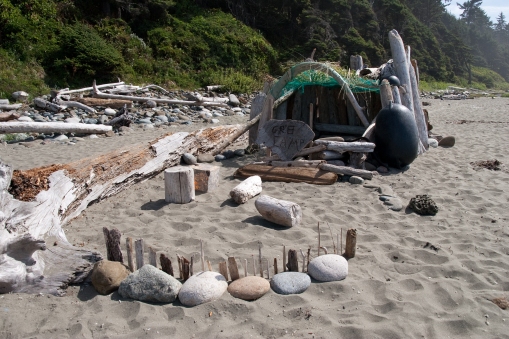