It was the last day of our trip to Glacier National Park and I was able to convince Robin into hiking to Cracker Lake. I didn’t know much about the trail but I had heard of the lake, which was supposed to be spectacular. We found a parking spot behind the Many Glacier Lodge and picked up the signed trail for Cracker Lake and Piegan Pass. Right off the bat we ran into a group on horseback making their way out, they had informed us that a couple of moose lived at Cracker Lake, we were hopeful to spot them. A short way down the trail we reached the junction for Cracker Lake where we went left and down the horse dung laden trail.

We heard the trail to Cracker Lake had lots of horse poop but I had never seen anything like this before and to be honest it made for a comfy landing for my boot soles and aching feet after two full days of arduous hiking in the park. We cruised along before dropping to the muddy shore of Lake Sherburne, it looked like the ocean tide was out, but truthfully this is a reality for a lot of dam controlled alpine lakes in late summer for the state of Montana. After traversing around the lake we entered a dense forest, and at almost two miles reached the crossing of Allen Creek. I chose to wade the creek, while Robin went for the bridge. One thing I was impressed with by the areas trails was how much water was still in the creeks, it was nice to never be more than a couple miles from a place to cool off. Once across Allen Creek we began a climb making several gentle switchbacks before gaining a ridge that offered our first view of Canyon Creek, we stopped here to catch our breath, hydrate, and take In the views across the canyon toward Wynn Mountain.

While taking our break we were treated to a couple ground squirrels who provided the entertainment chasing each other up and down and around tree trunks that surrounded us, chirping as they played. With the break over we were back on the trail as it rambled on sometimes steeply up, then steeply down for sometime before we finally reached Canyon Creek where the forest opened up. We crossed a couple fields of talus and scree before eventually crossing the creek itself at a sturdy bridge. It is quite obvious that man has molested the landscape here in an effort to get rich quick, and a few generations later you can still tell, so sad. Unfortunately, I can’t say much about the trail to Cracker Lake, other than a disappointing.  We found ourselves on the south side of the creek as we continued up the trail. The underbrush grew thicker and the woods more dense to a point of almost claustrophobic proportions. The trail continued like this for some time as we climbed gently. Eventually we climbed to a saddle and upon reaching it expected to see the lake, but to our surprise, nothing. The trail continued like this for a while with numerous false summits before finally gaining a view of the lake! It felt like eternity getting here, what a long trail, and what a perfect rock! We grabbed it, the only rock at this commanding view of the lake, a perfect spot for a lunch.

We sat on that rock feeling like we had discovered a golden city, there is no way to describe the beauty of Cracker Lake. Not in my wildest dreams could I have imagined a more beautiful place in the world. I felt like the luckiest man on the planet to have that view at that moment with the love of my life, total perfection. I have never seen a shade of blue that comes close to the water in Cracker Lake, it’s absolutely stunning, surrounded by towering rocky cliffs the setting is superb. After enjoying our lunch, we couldn’t help but get up on our sore feet and explore a little further. We walked the boot path along the lake shore to a giant rock on the south side of the lake, from the top of the rocky pinnacle the panoramic view is awesome, we took another break here before crashing out on the ground using our packs as pillows, we were beat. We laid there for a while embracing the sun’s warmth on our faces as time stood still, it felt like heaven. Eventually reality kicked in ,and unfortunately for us, we had seven long monotonous miles to hike back out to the trailhead.

Reluctantly, we picked ourselves up and began our long descent out, our feet were really beginning to get to us, and by the time we made the trailhead we were limping out of there. With our hiking done for the trip we had completed 34 miles in three days with close to 5000 feet of elevation gain, we were both whooped, but it was all worth it. Poor Robin’s feet were destroyed, she was such a trooper. Cracker Lake is a tough one, we covered 14 miles and 1,200 feet of elevation gain, what a way to top off such an amazing trip in such an amazing place! For pictures click the link. Cracker Lake Hiking Pictures 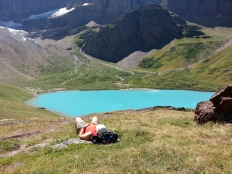 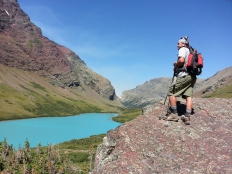