The Wenaha River had been on my to do list for some time, I had always hoped to through hike it one way, but with the years going by and trips into the back country few and far between I jumped at a chance to tackle this early season trip hiking deep into the Blue Mountains and the Wenaha-Tucannon Wilderness one way out of Troy, Oregon for a quick out and back.

Cole and I got an early start out of Spokane and with the close proximity and easy drive to the trailhead we were on the trail by 10am. Just beyond the trailhead we crossed through a cattle gate as we followed a dusty trail down hill a short ways to a meadow showcasing a splendid display of purple lilacs, reminded me of home. Working our way up stream we followed the Wenaha’s welcoming trail as it gave us plenty of relief with its gentle ups and downs. After as couple miles we found ourselves high above the wild and scenic river offering sweeping views of the lightly forested basalt canyon. The trail did have some exposure over loose rock in places so we paid close attention to our footing, which at times was hard to do when surrounded by such beauty.

We couldn’t of asked for better weather with highs approaching 75 degrees and a light gentle breeze,  a few wispy clouds streaked the sky and the sun was bathing us with all its glory for most of the trek. I was thankful for my cool tie which I had wrapped around my neck keeping me comfortable for the short climbs along the way. After a few miles of staying high above the Wenaha the trail dropped to another welcoming meadow along the river’s edge. I took a second here to soak my cool tie and bandanna while also splashing my face in its cool waters, what a splendid mountain oasis. Back on the trail it was more of the same, some ups and downs with more beautiful views and splendid meadows, always within earshot of the river.

At six miles we reached the boundary for the Wenaha-Tuncannon Wilderness, marked by the welcoming and familiar shaped sign on a large tree. A short ways beyond the tree was a trail junction with the Crooked Creek trail, we went left and in no time were at a large sturdy bridge spanning the creek. We were approaching the heat of the day so it was nice to drop the packs for a short lunch. Cole and I were both out of water so he let the gravity filter go to work on some hydration while we ate. We found a nice place to kick the boots off at the confluence of Crooked Creek and the Wenaha River. The down river view was easy on the eyes and the sound of the river cascading over rocks offered refreshment during the hottest part of the day. After my lunch of spring rolls, apple, and a jalapeno bagel we were back on the dusty dry trail. The bar at Crooked Creek is huge and could easy accommodate 100 tents, making it a likely place to camp for most people which is why we moved on.

Around mile seven things began to fall apart for me, a nagging pain in the outside of my right knee began to worsen, making any decent almost unbearable, also the metal frame of my pack had chafed my lower back so bad it felt like someone was digging their knuckles into a severe sunburn, on top of that a hot spot had developed between my third and fourth toe, so needless to say I was ready to drop the pack when we got to camp at mile 9.5 at Fairview Bar. I knew we had made it because I had found the signed junction for the side trail to Weller Butte. I dropped my pack at the one and only campsite on the bar complete with fire ring and benches.

With our packs on the ground we took a short break before grabbing the water filter and continuing upstream to find what a decent water source, a half mile away from camp we came across what was once a creek which either dried up years ago or already ran dry for the season, either way it wasn’t gonna produce. We turned around, made the quick trek back to camp where hung water from the Wenaha to let gravity do the work. We found what looked like the least lumpy spot and pitched our tent, lucky for us someone already collected the majority of our fire wood so that chore went quick, all that was left was the bear line and the hardest thing about that job was finding a suitable rock. With camp chores out of the way we put our chairs together and took a break at the river’s edge. It was nice to finally catch a break, I kicked off my boots and soaked my feet in the ice cold river. They should change the name from Fairview bar to Grandview Bar, looking downstream the canyon is somewhat open, ponderosa pine cover the grassy buttresses of the peaks above, as basalt cliffs form red and brown bands around the mountains as a reminder of how rugged this terrain really is, cross country navigation could easily trap a hiker among the rock making it almost impossible to go up or down. The rush of a mountain stream and It’s cool water upon my face gave life to a weary soul beaten by the trail. It had been a long time since I had logged a 10 mile day, and i could tell.

After soaking our feet we sauntered back to camp where we flopped out in our camp chairs until it was time for dinner. Meal prep was easy for me, I had hiked in some meat and cheese, an Asian salad, and some leftover jalapeno bagel from lunch. Oh, and for desert was a candy bar. Shortly after dinner we hung the food and started a fire. Our camp was situated perfectly in the canyon, the sun set at the lowest part of the horizon giving us a generous amount of sun for the day, and almost as the sun set a full moon rose. It was an awesome night by the fire and with the full moon it was so bright at night you could have hiked without headlamp.

The next morning we were up early, started a quick fire and sipped some coffee and after breakfast we began to break camp for the hike out. With provisions packed we topped off our water, grabbed the trekking poles and hit the trail, we had a long hike out ahead of us so it was nice to hit the trail early. Approaching Crooked Creek we ran into a couple that were exploring the canyon on a day hike from camp, they told us about a bear that came to visit their camp this morning and about a rattlesnake encounter they had on the trail. After bidding farewell we we were back on the trail. The hike out was nice as the temps were really much more comfortable in the cooler morning hours. Around the five mile mark I was in the lead when Cole informed me that I had just stepped over over a rattlesnake.  I didn’t believe him and had to turn around and see for myself, sure shit, there he was coiled up in the middle of the trail, I have no idea how it didn’t step on the thing, somebody was looking out for me. Back on the trail, we continued out, obviously a little more cautiously, I made sure to sweep the brush hanging over the trail with my trekking pole just in case anymore venomous snakes were lurking. It was approaching lunch time when we reached a meadow along the river with a giant log resting in the shade. We took the time to drop the packs and grab a bite to eat. It was starting to get hot so before before we left I decided to soak the bandanna and cool tie in the cool water before grinding out the last stretch of trail.

After climbing up from the meadow the trail stayed high above the river for the last two miles out, nearing the trailhead we we were both done and out of water when we reached the car. What a great hike, you couldn’t have asked for better weather. It had been a long time since I had covered 20 miles in two days, but it felt good. On the way home we stopped for milkshakes at Bogan’s Oasis and burgers in Lewiston at Effie’s Tavern, that place always hits the spot. For more pictures click the link. https://www.flickr.com/photos/tannergrant/albums/72157651890094677 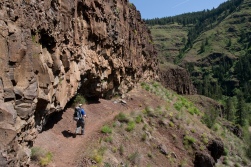