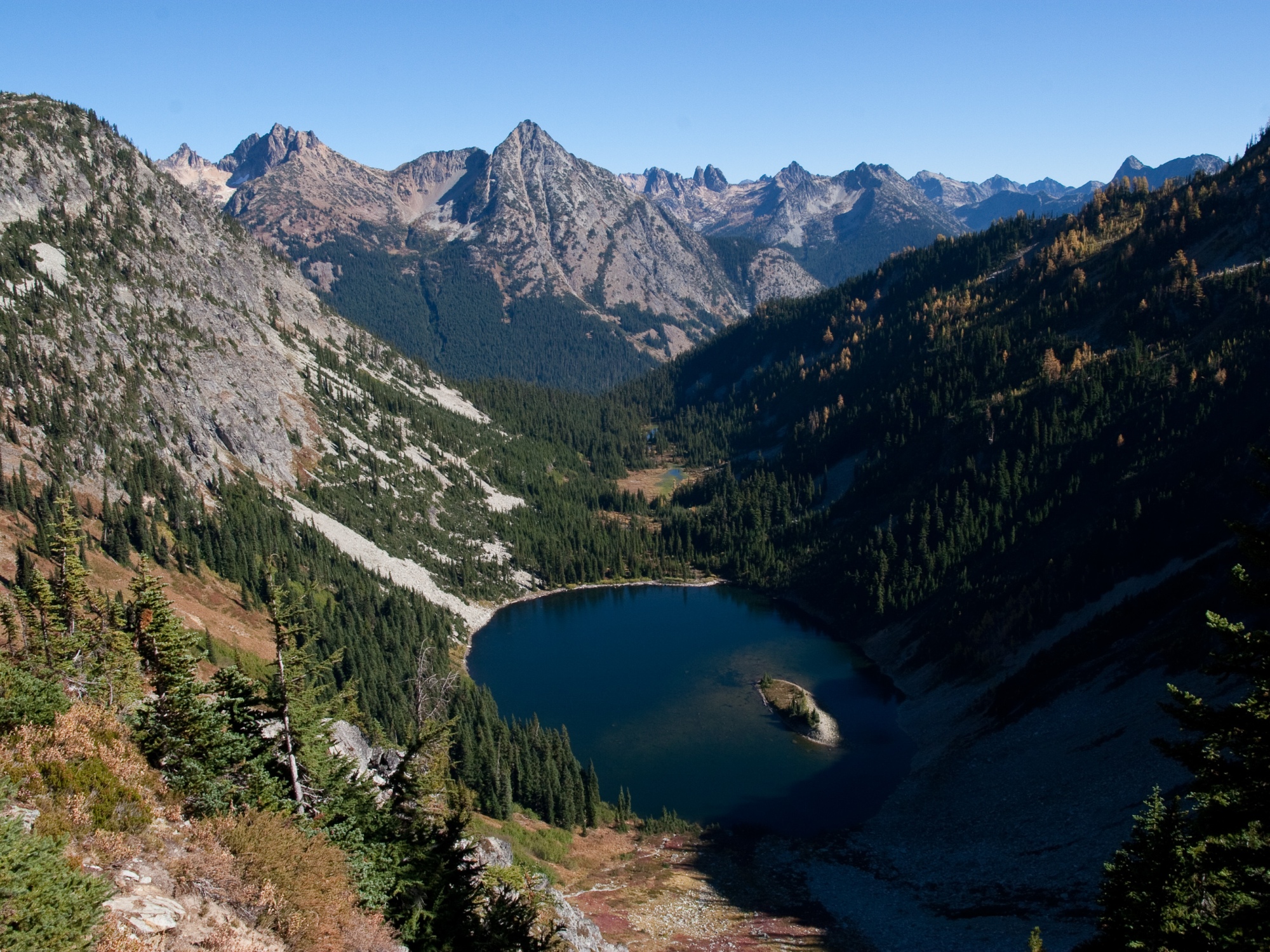 Under blue skies we arrived at the trailhead on the south side of the road at Rainy Pass, elevation 4,855 feet. Lucky for us we were able to grab one of the last parking spots left at the trailhead for the Maple Pass loop. It was obvious by all the Subarus and liberal bumper stickers in the parking lot that the west side was out in full force. After loading our provisions for the day we were on our way.

Just beyond the trailhead marker we reached the junction with the return trip and went right in the direction of Ann Lake and Heather Pass. The trail gained elevation at a manageable pace and after a few switchbacks entered a basin with a break in the trees offering our first view back across the valley toward imposing peaks of the north cascades. Back in the trees we continued up a short way before reaching the turnoff for Ann Lake. Eddie and i decided to go left for the easy side trip to the lake. We passed through a pleasant forest, and then meadows holding shallow tarns before arriving at a cirque that held Ann Lake, elevation 5,475 feet. After picking our way through the trees we stumbled upon a massive log jam typical to high alpine lakes and dropped the packs. Seated atop the pile of old sun bleached logs the sun filled our faces, it was warm, not typical this high up in October. Usually larch trips are reserved for gluttons of suffering. The lake was like glass, not even the slightest of breeze to disturb its pristine waters. The sun now above the ridge to the south, threw rays through the crowns of the golden alpine larch clinging high along the ridge. Away from the hordes of hikers along the main trail we found solitude at the lake. We were pretty surprised at how few people actually take the short side trip which is a must in my opinion. After a short break we picked up our packs and made our way back to the junction where we went left continuing with the loop and rejoining the hoards.

The trail continued its ascent crossing a rather large rock slide and before long offered spectacular views back down toward Ann Lake and her lone island. We eventually reached Heather Pass, elevation 6,200 feet. Once at the pass we then wandered north to spectacular views. From our rocky promontory we were greeted with vistas of magnificent Corteo and Black Peaks and in a cirque below the divide nestled pristine Lewis Lake ringed with splendid golden alpine larch. Just beyond the shoulder of Black Peak suspended a full white moon against a vivid blue sky. Again we dropped the packs, considering this destination a worthy one for another extended break. The best hikes are the ones in which you can take your sweet time. While enjoying the breathtaking scenery out of nowhere burst a flame! Numerous golden larch were now ablaze by an out of control camp fire along the fragile shores of Lewis Lake. Eddie and I stood amazed at what we were witnessing as our blue skies were replaced with billowing smoke. Luckily for Lewis Lake the flames did not go unnoticed and smoke jumpers quickly extinguished the flames. After fingering for what felt like long enough Eddie and i were back on our way.

We picked up the trail continuing counter clockwise as we climbed past golden alpine larch to the national park boundary near Maple Pass, elevation 6,600 feet, some one thousand feet above Ann Lake far below. The views in all directions were absolutely stunning. At our feet sat Ann Lake and beyond toward Whistler Mountain, Hinkhouse Peak and the cascade crest over Cutthroat Pass and the pacific crest trail. To the north was Mount Hardy, Tower Mountain, and the Golden Horn. To the west stood Corteo Peak, Mount Benzanna, and the gateway into North Cascades National Park, a backpackers paradise. To the south lay the entire Maple Creek drainage and imposing Frisco Mountain, everything in all directions was absolutely beautiful. We stood in awe, letting the hoards pass us bye while we took in the view, this is one of the most amazing places I had ever laid eyes on. Back on the trail we picked up the path as it followed the ridge crest to a shoulder of Frisco Mountain, elevation 6,850 feet. The trail continued downhill from here passing through amazing park like meadows with larch at their peak of golden splendor before entering dense forest losing more elevation along a ridge separating Ann Lake to the west and Rainy Lake to the east. With the views now behind us we got into the groove of the descent when just around a corner we came across a lady who had just fallen. Unfortunately for her it turned out to be more than just a fall as she had completely severed her tibia, and upon rolling over left an ankle dangling unattached from the knee joint above it, a horrific injury in the backcountry. Eddie and I were first on the scene and did our best to get the older lady comfortable. It was late in the day, and I knew for a fact she could potentially be spending a night on the mountain. I gave her my space blanket, wished her luck, marked her location on my GPS and said goodbye. Eddie and i had a responsibility, we had to get out of there as fast as possible and warn as many people as we could to the ordeal on the trail. We literally ran our assess off that mountain passing several people on the way out before eventually reaching the trail junction for Rainy Lake, no time to visit Rainy Lake as we had to notify the authorities.

We reached the trailhead in record time and quickly flagged down a few cars leaving the parking lot to call 911 about the lady with the broken leg on the Maple Pass trail. Just as we were about the reach our car I noticed an emergency vehicle enter the trailhead parking lot. I ran over, flagging them down, amazed that they so happened to arrive! I quickly notified to them the situation as they instantly went into action. The rather large fellow jumped on the radio notifying dispatch of the ordeal. We were instructed not to leave as they pulled over setting up a base camp for the rescue.  The gentleman jumped out of his truck with a map of the area and had me show him exactly where she was. I also relayed to him her coordinates from the GPS which he instantly relayed over the radio more than once. Turns out he was doing a final sweep of the area after responding to the forest fire that we witnessed at Lewis Lake back up at Heather Pass and just so happened to be in the right place at the right time for a rescue. Minutes later another vehicle arrived, and a couple of stud-duck six foot something twenty year olds stepped out with chainsaws over their shoulders. They wanted some directions to the injured hiker and asked me to escort them in her direction, I obliged.

We hurried down the trail, myself doing the the best I could to keep up. As we approached the turn off to Rainy Lake I pointed them up hill letting them know that they couldn’t miss her as they disappeared around the next switchback. Back at the trailhead a full blown rescue mission was in full swing. It was almost dark before the commander gave us the go ahead to get out of there, we felt good about our actions, it’s not everyday that you get to be a hero. I was thankful for my GPS to have exact coordinates and that extra space blanket for the injured hiker, always helps to be prepared. We didn’t have too far to drive and back in camp we cooked dinner wondering how that lady on the mountain was doing. Just to show you how small this world really is, my buddy Eddie who was with me on the hike later x-rayed the lady post operative who had fallen and broken her leg right in front of us. Turns out, she didn’t remember us at all from being in shock, but thanked Eddie for our efforts to help her that day. She told Eddie that the stud-duck fire fighters cleared several trees from the trail with the chainsaws so that a navel helicopter from Everett could get close enough to pluck her off the mountain around 4am. What an amazing day in the mountains. The Heather and Maple Pass loop should be on everyone’s bucket list, but I sure hope you don’t have as much excitement as we did. We covered about 8 miles and 2,000 feet of elevation gain. For more pictures click the link. Maple Pass Loop Hike 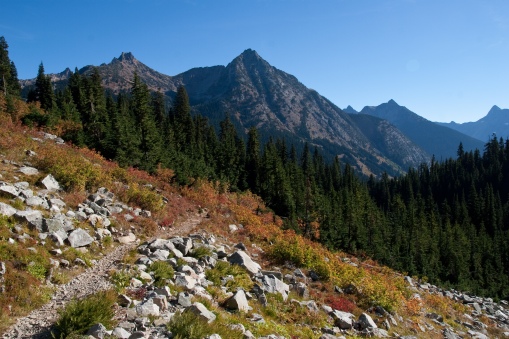 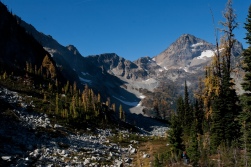 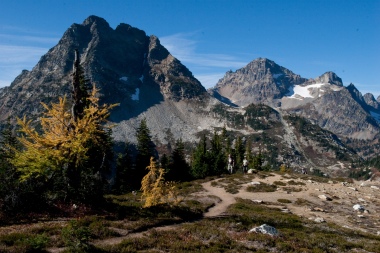